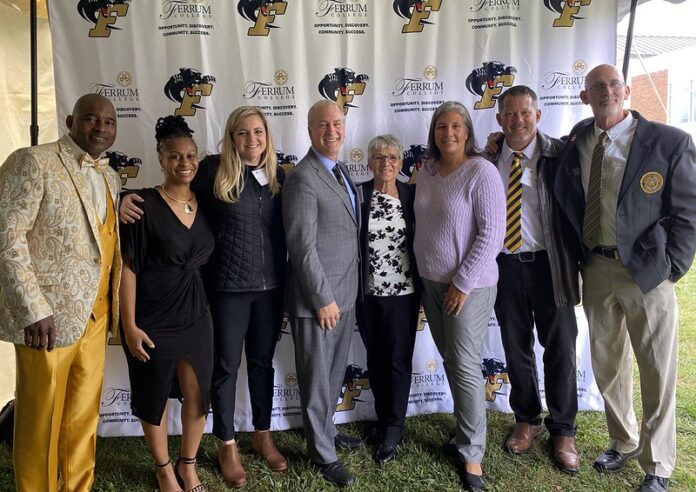 In a brisk, outdoor ceremony at the Franklin Hall Quad on Saturday, October 30, Ferrum College recognized its 2021 Distinguished and Outstanding Alumni Award recipients, as well as its Sports Hall of Fame inductees for both 2020 and 2021.
After President David Johns opened the ceremony, Director of Athletics John Sutyak recognized the 2020 Sports Hall of Fame inductees. These individuals excelled in one or more sports while at Ferrum College, exemplifying the highest ideals of small college athletics, sportsmanship, and the spirit of Ferrum’s motto, “Not Self, But Others.” They have since gone on to achieve significant success in a career field. They are: Elizabeth Adams O’Neal ’00 of Wake Forest, NC; Kathy Bocock ’84 of Greensboro, NC; Shelby Irving ’84 of Danville, VA; Bobby James ’84 of Rocky Mount, VA; and Becky Piloto Fennessy ’92 of Avondale, PA.
Special recognition was given to Coach Jim Hartbarger of Silva, NC, who served as Ferrum’s head men’s basketball coach from 1964-67, and produced a 71-15 record.
Sutyak then recognized the 2021 Sports Hall of Fame inductees: Tricia Moore Barber ’06, of Sneads Ferry, NC; Melvin Dillard ’92, of Hampton, VA; Roben Sutphin Thomas ’96, of Woodbridge, VA; Tara Toland ’05, of North, SC; and Mark White ’96, of Deltaville, VA.
Special recognition was also given to Gary Holden, who is in his thirtieth year as Ferrum’s sports information director and his eighteenth year as assistant athletic director, and to Vickie Van Kleeck, who served as head softball coach for 24 years.
The Distinguished Alumni Award was bestowed upon Rev. Dr. Burton White ’84 by Vice President for Institutional Advancement & External Relations Wilson Paine ’07. White’s exceptional service to his community includes 31 years spent in ministry and the creation of Solutions Pastoral Counseling, LLC, which offers counseling services to the Ferrum community for free or a reduced cost.
Paine then presented the Outstanding Young Alumni awards to Paul Jaglowski ’12 and Ra’meer Roberts ’13. Jaglowski was an Academic All-American and the 2012 recipient of the Ferrum College President’s Cup. Jaglowski also founded Feedtrail, a software company that empowers healthcare organizations to deliver an exceptional and human-centered experience, and has served on Ferrum’s Alumni Board of Directors, as well as the board of directors for Maison Fortune Orphanage in Hinche, Haiti. In 2018, Jaglowski was named as one of the 30 Rising Customer Experience Superstars under 30 (CS 30 Under 30) by CX Network.
During his time at Ferrum College, Roberts was named to the Dean’s List, served as the College’s radio host in 2008 and 2009, and was a member of the basketball staff from 2009-12. After graduation, Roberts established the Black American Scholarship of Empowerment at Ferrum, which gives an annual gift of $250 to one male and one female African-American student. He currently works as the assistant director of residence life for conduct at Virginia Commonwealth University.