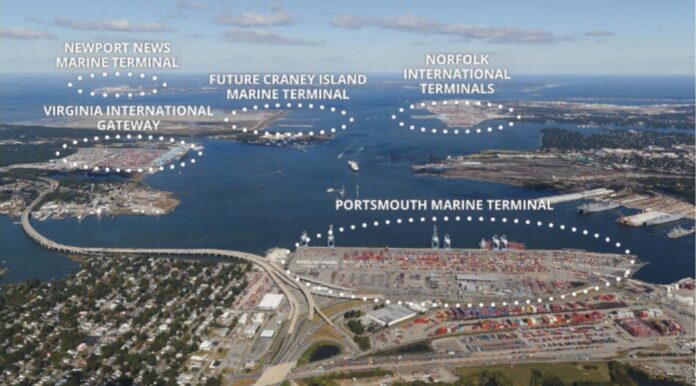 The Port of Virginia has reached an agreement to lease a portion of the Portsmouth Marine Terminal to Dominion Energy—dramatically accelerating the largest commercial clean energy offshore wind development in the United States and creating a place in Virginia for a new American industry to emerge.

Under the agreement, Dominion Energy will use 72 acres of the deep-water, multi-use marine cargo Portsmouth Marine Terminal as a staging and pre-assembly area for the foundations and turbines that will be installed 27 miles off the coast of Virginia Beach. The Virginia wind project will produce more than 2,600 megawatts of clean, renewable energy—enough to power up to 660,000 homes.

“This location at the Port of Virginia is second to none,” said chair, president, and CEO of Dominion Energy Robert M. Blue. “It has deep water access, no overhead restrictions, a strong, experienced maritime workforce and sufficient space for these large wind infrastructure components. It is perfectly situated to serve the Virginia offshore wind project and grow the domestic supply chain needed to complete other offshore wind projects in the United States.”

Blue spoke at the Business Network for Offshore Wind’s International Partnering Forum, a three-day global conference being held at the Greater Richmond Convention Center. It is the largest offshore wind conference in the Western Hemisphere. More than 1,300 people are participating in person, and another 1,000 online.

The lease term is 10 years—valued at nearly $4.4 million annually—and includes an option for two five-year renewals. The lease agreement includes significant upgrades to ensure the terminal can handle the weight of the large components that will be deployed to build the offshore wind turbines. Once the components are loaded onto ships, the vessels will travel to the construction site 27 miles off the coast of Virginia Beach.

The agreement comes just 18 months after Governor Northam signed into law the Virginia Clean Economy Act, cementing Virginia’s commitment to clean and renewable energy. The law sets a target of 2034 for producing at least 5,200 megawatts of energy through offshore wind, and a target of 2045 for achieving 100 percent carbon-free energy production.

Negotiations accelerated in July, when the Virginia Port Authority Board of Commissioners directed Stephen A. Edwards, CEO and executive director of the VPA, to finalize the lease negotiation.

“For the last several years it has been known that The Port of Virginia, and specifically the Portsmouth Marine Terminal, is positioned to be the leading Mid-Atlantic logistics hub for the offshore wind industry,” said Port of Virginia CEO Stephen Edwards. “This agreement capitalizes on PMT’s potential and solidifies Virginia’s place as the leader in this growing and competitive field. This port is ready to support Dominion Energy and all of the businesses and jobs that will ensure the success of offshore wind in Virginia.”

“Virginia’s agreement with Dominion Energy accelerates the Commonwealth’s transition to clean, renewable energy, creates good-paying jobs, and expands Virginia’s economy,” said Secretary of Transportation Shannon Valentine. “This partnership also positions the Port of Virginia as the hub of this emerging industry, and Virginia as the forerunner in offshore wind.”

“Our coastal assets speak for themselves when it comes to business opportunities for offshore wine,” said Secretary of Commerce and Trade Brian Ball. “Virginia has been recognized as the country’s best state to do business since 2019, and we welcome companies eager to expand here in the United States.”

“There is no better state than Virginia to host this year’s International Offshore Wind Partnering Forum,” said Business Network for Offshore Wind CEO and President Liz Burdock. “Under Governor Northam’s leadership, Virginia continues to show a strong commitment to offshore wind power and the many benefits it offers—job creation, green energy, new technology, and more. We are proud to partner with the Commonwealth to host this important conference.”

Offshore wind is a growing industry in the United States, backed by the Biden Administration’s target of 30 gigawatts of offshore wind capacity by 2030. Dominion Energy’s Virginia project is a vital part of the company’s clean energy strategy to meet standards outlined in the Virginia Clean Economy Act and to achieve the company’s net zero carbon dioxide and methane emissions commitment across its 16 state footprint by 2050.

Presently, Dominion Energy’s two-turbine pilot project is operating off of the coast of Virginia Beach. Last month, the Bureau of Ocean Energy Management issued a “Notice of Intent” for the full commercial project. The Notice of Intent triggers a federal review of the project and preparation of an Environmental Impact Statement, which will take about two years.