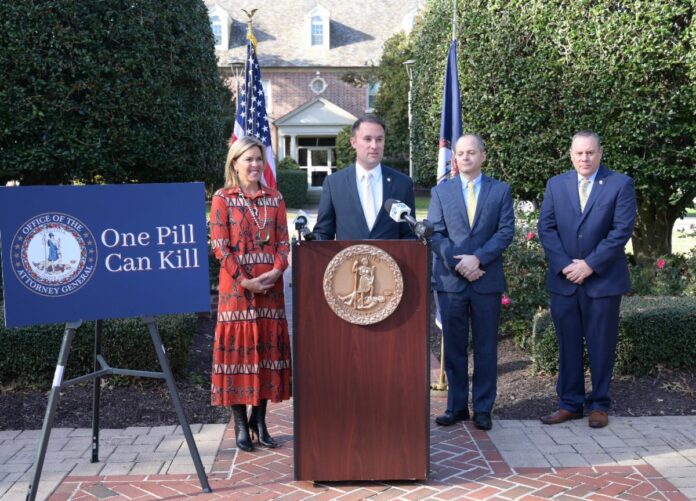 Attorney General Jason Miyares has launched a new “One Pill Can Kill” public awareness initiative, to help generate open, honest conversations amongst families about the extreme threat that counterfeit drugs and opioids pose.

The Attorney General was joined by First Lady Suzanne S. Youngkin, who spoke about her new “Women & Girls: Wellness” initiative.

“The opioid epidemic has had a devastating effect on our Commonwealth. There isn’t a corner of our state that hasn’t been touched by its pain and destruction. Tragically, overdose deaths are now not limited to addiction, but to counterfeit pills laced with a highly potent, deadly substance – fentanyl,” said Attorney General Miyares. “Unfortunately, we’ve seen too many young people overdose and die after experimenting with these powerful drugs. As a father, this new threat terrifies me. That’s why I launched ‘One Pill Can Kill,’ a public awareness initiative aimed at generating conversations around the dangers of counterfeit drugs and fentanyl.” 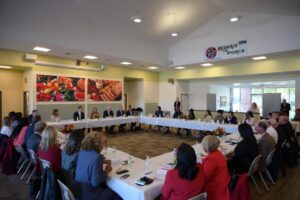 Following the press conference, the Attorney General and First Lady hosted a roundtable discussion with community leaders and behavioral health specialists about how Virginia can effectively reduce opioid and counterfeit drug deaths.

“With a keen eye to improving the wellbeing of Virginians, and in the spirit of Thanksgiving, we celebrate an honest conversation around the realities of overdose and fentanyl poisoning,” said First Lady Suzanne S. Youngkin. “I hope that families will prioritize difficult discussions, hug one another tight, and get trained in REVIVE! as, sadly, we know it only takes one pill to kill.”

In Virginia, the leading cause of unnatural death is drug overdoses, and has been since 2013. Opioids – specifically fentanyl – has been the driving force behind the large increases. In 2021, fentanyl contributed to 76.4% of all Virginia overdose deaths. The total number of fatal fentanyl overdoses increased 22.8% from 2020 to 2021. It was estimated that in 2021, 98% of fatal fentanyl overdoses in Virginia were caused by the illicit, rather than prescription, version of the drug.