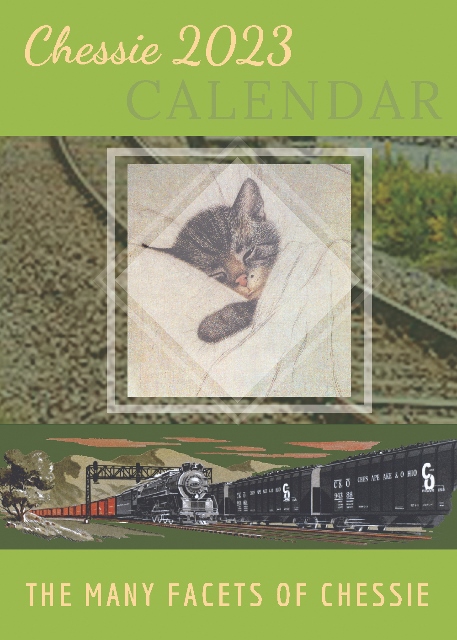 The Chesapeake & Ohio Historical Society, the group dedicated to preserving the history of the C&O Railway, has just published its yearly fundraising calendars for sale in support of the 53-year-old non-profit organization.  These printed calendars include the famous Chessie “The Railroad Kitten” calendar, the longest-running railroad-themed calendar in the United States.  This 89th edition of the Chessie calendar features a selection of vintage C&O Railway advertising art from the 1930s-1940s.

This year’s theme, “The Many Facets of Chessie,” shows the many roles that Chessie played in the C&O’s famous advertising campaigns through the decades.  With illustrations all taken from vintage Chessie advertisements, these selections reflect the complexity not only of the railroad’s public relations campaigns over the years, but also its operations.

After Chessie was introduced to the traveling public in 1933, her image was eventually used to promote and explain many services and locations throughout the Chesapeake & Ohio system.  These images of Chessie and her family have been preserved in the C&O Historical Society’s archive, and as a result, have delighted the public for many years.  The Chessie calendar reached its peak distribution with 425,000 copies in 1947.  The Wall Street Journal once called Chessie “the kitten of destiny.”

The Society has also published its traditional calendar dedicated to Chesapeake & Ohio steam locomotive power, this year focusing on coal trains powered by the late-era steam locomotives of many types.  The photographic selections feature a variety of steam locomotive classes including the H-8, H-6, H-7, G-9, T1, and K-2.  Shown at various locations on the C&O Railway system, these archival photos are chosen to represent a variety of geographic regions from Ohio to Virginia in typical heavy coal train service.

Completing the fundraising calendars offered for 2023, the C&O Historical Society has, for the second time, published a special calendar dedicated to a specific region along the Chesapeake & Ohio Railway— the New River Gorge National Park and Preserve.  Explaining why the C&OHS is again publishing a calendar dedicated to this geographic region, the organization’s president, Mark Totten, explains, “The success of last year’s calendar combining the Chesapeake & Ohio Railway with the New River Gorge, as opposed to a purely railroad-specific topic, was a tremendous fundraising success, selling nearly 1,000 copies.  The appeal of the New River Gorge is just as strong with the public as it was a year ago, so it was an easy decision to repeat this equation with additional photos selected from our archive.”

Totten explained the significance of this region in West Virginia that was crossed by the C&O Railway, “The Chesapeake & Ohio Railway’s completion of their great east-west connection at Hawks Nest in 1873 set in motion a history of infinite depth that, in this century, is still a subject studied at great lengths.  In  this calendar’s images we have framed the Chesapeake & Ohio in the New River Gorge as ‘the machine in the garden.’  The railroad brought people into this part of the country who would have never otherwise witnessed the towering walls of the gorge, caught glimpses of its hidden waterfalls, gazed up at its stone cliffs, or heard its rushing waters.”  The former C&O Railway, now CSX Transportation, still runs through the New River Gorge from Gauley Bridge to Hinton, West Virginia.

In addition to showing historic scenes throughout the New River Gorge from its industrial peak, the C&O Historical Society again dedicates this regional calendar to two living connections to the history responsible for bringing thousands through some of the most rugged terrain in North America.  C&OHS President Mark Totten described the two individuals who are honored, “Like the legendary mountain railroaders before them, the honorees, Mr. Leonard L. Claytor and Mr. Eric S. Pack, captained ‘the machine through the garden.’  Believed to be two of the last active C&O Railway hires at the time of their retirements, these gentlemen added their own pages to history during their illustrious careers.”

Mr. Leonard L. Claytor hired onto the C&O on November 10, 1969.  He began work in St. Albans, West Virginia and worked in the yards at South Charleston, Huntington, and Handley.  Working through Chessie System and CSX Transportation at places like the Coal River and Cabin Creek Subdivisions, Mr. Claytor transitioned to Amtrak in 1985.  During these years, he was a well-known fixture on the passenger train The Cardinal, working the territory the C&OHS’s regional calendar covers and continuing the history and hospitality of the Chesapeake & Ohio into the 21st century, even as twilight fell on the old railroad.

Growing up in a railroad family, his father, Mr. Howard Winfred Claytor, Sr., retired from the Chesapeake & Ohio Railway as a track supervisor after 32 years of service.  In his career, Leonard Claytor guided countless numbers of travelers over the C&O Railway’s former territory, retiring as a conductor on December 19, 2021.

Mr. Eric S. Pack is a retired locomotive engineer, retiring June 26, 2020, after 50 years of combined service with C&O, C&O/B&O, CSX, and Amtrak.  Early in his career, he ran trains from Hinton to Durbin on the Greenbrier Subdivision.  After transitioning to Amtrak, Mr. Pack piloted The Cardinal on the same route used by the Chesapeake & Ohio in its original east-west connection, through the New River Gorge in all conditions resulting from mountain railroading’s perils and pitfalls.

Mr. Pack’s father, Cletis Pack, was a railroad car inspector with 30 years of service.  His mother, Betty Jo Pack, was a telegraph operator with 32 years of service.  Eric is one of eleven children and the only one that ended up working for the railroad, where on his first day, he worked at the current location of the C&O Railway Heritage Center museum in Clifton Forge, Virginia.  His maternal grandfather was the section foreman at Fire Creek, West Virginia when his mother was born.  His paternal grandfather cut cross ties and sold them to the railroad.

Both men now volunteer with the C&O Historical Society, giving lectures about their careers and sharing their history with audiences firsthand.  These individuals represent just two of many thousands of railroaders who lived and worked within this region of West Virginia for over 100 years, opening a gateway into this otherwise inaccessible region.

C&OHS President Mark Totten concludes, “Before the Chesapeake & Ohio Railway clawed out the right of way along the New River and through the Appalachian Mountains, a person from Cincinnati or New York would have little reason (or option) to see the New River Gorge in this life.  What wonder must have filled the minds of those who came into the mountains for the first time aboard the earliest of trains.  Continuing toward 2023, what of that wonder remains in a passenger who, having boarded Amtrak’s Cardinal in Chicago or Manhattan, looks out a window at the turbulence of the waters in our ancient canyon, or looks up its steep cliffs at the same stone formations seen by the first visitors over rail 150 years before?”

Our non-profit organization’s biggest fundraiser of the year, these calendars are available now and can be purchased three ways:  in person at the C&O Railway Heritage Center Museum Gift Shop, online at ChessieShop.com, or by calling 540-862-2210 Monday through Friday from 9 AM to 5 PM.  Proceeds support the C&O Historical Society’s mission to preserve and interpret our transportation history.