Share
Facebook
Twitter
ReddIt
Email
September 23, 2022
0
On a recent walk with Asa the Pandemic Pup, we noticed the woollies are on the move again.
This time of year, armies of black-and-brown-banded fuzzy caterpillars start crawling across streets and sidewalks everywhere. They are nature’s fastest caterpillars, capable of traveling over a mile a day. So you’ve probably wondered, where are they all headed in such a hurry? What are they all up to?
Well, one thing they are NOT doing is forecasting the winter ahead. We know this because, between 1948 and 1956, the curator of insects at the American Museum of Natural History led a group called the Original Society of the Friends of the Woolly Bear on a little research project. Each year they collected as many woollies as they could and counted how many black segments they had at their ends, versus how many brown segments they had at their middles. 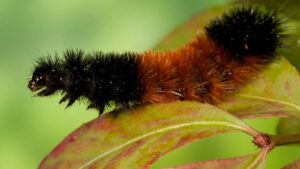 They postulated that the more brown segments each year’s woollies had on average, the warmer the coming winter would be. Skinny brown section = cold winter; fat brown section = warm winter. Their annual prediction was printed in the New York Herald Tribune. This made woolly bears instant national celebrities. But, unfortunately, this formula has since been discounted as pure folklore.
What IS true about woolly bears crossing the road is that they are looking for a good place to freeze. The caterpillars (officially they are the larva of the tiger moth Pyrrharctia isabella) spend the late summer eating weeds like dandelion and clover. As the temperature drops, they look for a nest of organic material under a rock or hard surface to burrow into for the winter.
They then dehydrate themselves and develop a cryoprotectant (a sort of biological antifreeze) that allows them to survive the winter by freezing solid. First their heart stops and freezes, followed by their gut, then the blood, and finally the rest of their body. (Tests have shown that they can survive seven consecutive days in sub-freezing temperatures.) When the Spring comes, they come back to life and pop out of their nests. They eat like crazy, spin a cocoon, and pupate into a tan-yellow moth with dark spots. And start laying eggs to create the next generation.
Woolly bears are adorable. Which explains the Woolly Bear Festivals in Vermilion OH, Banner Elk NC, and Beattyville KY. Folks gather around to watch woolly bears predict the weather (fun, but dopey) and race across stone surfaces (dopey, but fun).
And they are pretty harmless. The fur coat is actually soft hair called setae. Though some folks with sensitive skin can develop a rash after repeatedly touching one, woollies have no toxins or poisons or venom. Nonetheless, you probably shouldn’t let the dog eat one.
Just leave them alone, because if you touch one it just curls up and plays dead until you stop annoying it. And as soon as you are gone, it will be on the move again.
– Mike Keeler
Share
Facebook
Twitter
ReddIt
Email
Previous articleAG Miyares and Coach Frank Beamer Team Up For VA Child ID Program
Next articleEarly Voting Opens in Virginia; Same-day Registration New This Year

The hunt for the perfect tree is oftentimes an important part of family tradition. Buy local whenever possible by supporting local Christmas tree growers....

As discussed here, the US Senate has scheduled a vote for 5:30 pm on Monday, November 28, on what supporters have dubbed the "Respect...

According to the Washington DC-based Religious Freedom Institute (RFI), "The American Founders understood the importance of religion for the flourishing of individuals and society....

DEVOTIONAL: How Can You Know The Will Of God?

Give thanks in all circumstances; for this is God’s will for you in Christ Jesus. First Thessalonians 5:18 Many sincere people wonder, "What is God's will...

As schools are closed and many adults are either already traveling or preparing for the big meal, the US is experiencing its busiest travel...