Home Bill Turner WILD BILL’S SPORTS ROUNDUP!
Facebook
Twitter
ReddIt
Email
Here we are once again. The final Wild Bill column for 2021.
And what a year it has been.
A long haul back from a virtual shutdown of sports earlier this year due to COVID-19, to the resumption of games with fans in the stands. Plus, another twelve months of the Chief’s unexpected antics that led the staff on a perpetual roller coaster ride on everything from having to rescue him from a shady motel in Ft. Meyers, Florida to his announcement in late-summer that The Star would enter the civilian space race with its own StarCosmos CPR250K passenger rocket.
While the Chief’s push to sell tickets and assemble a staff had its initial bumps, things moved forward rapidly as potential passengers tested our patience with items like dealing with zero-gravity weightlessness on our on-board toilets and the expectations of top-shelf alcoholic beverage service, to one affluent passenger insisting on buying a ticket for her feline companion, Precious Princess Puss & Boots. The Chief eventually caved on the pussycat being aboard, rationalizing that dragging along a cat would help avoid dealing with mice.
Training flights took center stage in the summer off the Atlantic with our attractive Captain Caro heading up the Rescue and Reconnaissance Section. All was looking peachy until a fateful day in October when upon entering corporate headquarters, I was told we had a potential MAYDAY in progress and video footage was coming in on a possible crash-landing along an Atlantic beach. The staff looked on in horror as what appeared to be a StarCosmos auxiliary craft descending into the waters as beachgoers swam in waist-deep surf, looking helplessly skyward as the craft’s ditching attempt unfolded. 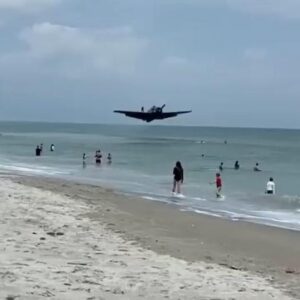