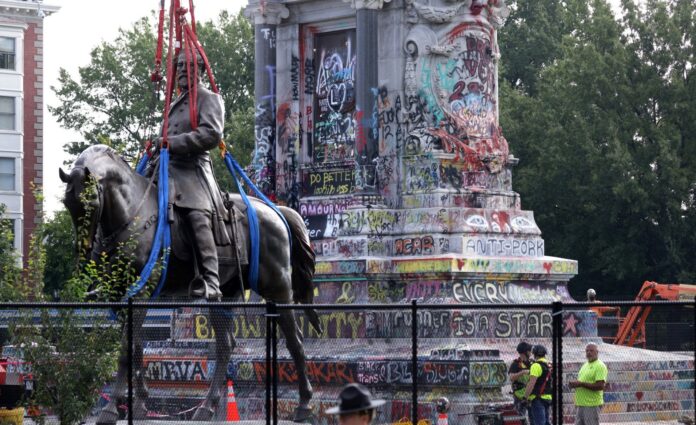 New capsule will replace capsule in Lee Monument Base

Governor Ralph Northam has announced the artifacts for a new time capsule that will be placed in the concrete pedestal of Richmond’s Lee Monument.

Historians believe a copper time capsule was placed in the cornerstone of the Lee pedestal on October 27, 1887. Records from the Library of Virginia suggest that 37 Richmond residents, organizations, and businesses contributed about 60 objects to the capsule, many of which are believed to be related to the Confederacy.

Should it be removed later, the time capsule will be buried nearby.

“This monument and its time capsule reflected Virginia in 1890—and it’s time to remove both, so that our public spaces better reflect who we are as a people in 2021,” said Governor Northam. “The past 18 months have seen historic change, from the pandemic to protests for racial justice that led to the removal of these monuments to a lost cause. It is fitting that we replace the old time capsule with a new one that tells that story.”

“The 1887 capsule we will remove this week offers us an incisive bite of time when the Lee Monument was erected. Now in 2021, this capsule gives future Virginians artifacts of the tectonic transition that has happened to us,” said DiPasquale. “The pedestal marks the past and has a new message for the future: we, all of us, are the New Virginia.”

Artifacts for the new time capsule were suggested by members of the public, and narrowed down to 39 final choices by a committee that included historians from the Richmond region’s leading historical and cultural museums and members of Governor Northam’s cabinet.