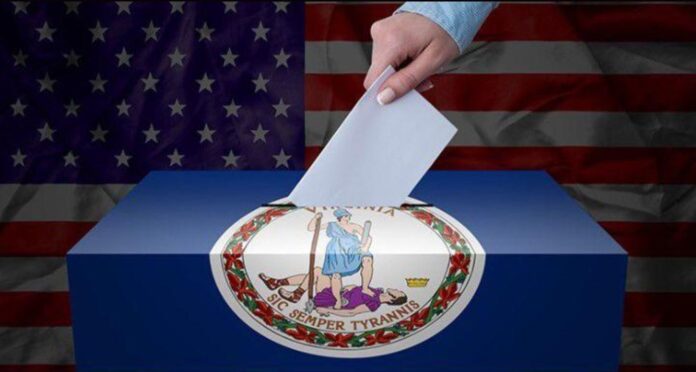 Democrats also lead the downticket races, with Del. Hala Ayala (D) leading former Del. Winsome Sears (R) by only 6 percenatge points 42%-36% for lieutenant governor and Attorney General Mark Herring (D) leading Del. Jason Miyares (R) by 8 percntage points 45%-37% in the race for attorney general. The Institute for Policy and Opinion Research interviewed 558 likely Virginia voters between Aug. 3 and Aug. 17 and has a margin of error of +4.2%.

McAuliffe’s favorable rating is 44% while his unfavorable is 32% with 21% unsure or don’t know enough to have an opinion. Youngkin is at 27%/21% favorable/unfavorable, but half (50%) of likely voters still don’t have an opinion about him.

Voters prefer a candidate with governmental experience (48%) over one with business experience (38%), and they are much more likely to think that policy in the Commonwealth has been moving too far in the liberal direction (41%) than in the conservative direction (6%).

Biden, Northam, the Nation, and the Commonwealth; Critical Race Theory

A plurality of likely voters (48%) approves of the way President Biden is handling his job, while 43% disapprove. Biden’s approval rating has remained steady, but disapproval has been rising from 30% in February to 39% in May and 43% in August. (Editor’s Note: This poll was taken just before the fall of Afghanistan.)

Biden’s favorable/unfavorable rating is 48%/43%. Job approval for Congress is 17%, and 71% disapprove. One-third (33%) of respondents think the country is headed in the right direction while 58% think it is on the wrong track.

Job approval for Virginia Gov. Ralph Northam sits at 52%, up slightly from May, while 38% disapprove of his performance, also increased since May. Just over half (52%) of respondents think that Virginia is headed in the right direction, but 43% think it is on the wrong track. Less than half (41%) approve of the job being done by Virginia’s General Assembly, while 35% disapprove. Northam is viewed favorably by 48% of likely voters (a Roanoke College Poll record high for him) and seen unfavorably by 37% (1% shy of that record).

Nearly three in four (72%) likely voters have heard at least a little about Critical Race Theory (CRT), and almost three-fourths of that group (73%) say they have a good idea of what it is. Among those who have a good idea what CRT is, 40% view it favorably, but more (47%) see it unfavorably. More see its teaching as bad for America (47%) than good for America (44%).

IPOR continues to track political anxiety in the Commonwealth. Four-in-five (80%) Virginians trust the federal government to do what is right only some of the time or never. A majority (55%) thinks that ordinary citizens can do a lot to influence the federal government, and just under half (49%) think their side is losing more than winning in politics today, while 30% think they are winning more than losing.

Most respondents (54%) think the country’s best years are ahead of it, while 40% (a record-high in the Roanoke College Poll) think its best years have passed. Overall, a large majority of Virginians (89%) continues to see the nation divided regarding the important issues facing the country.

A plurality of respondents (45%) is dissatisfied with how the federal government is (or isn’t) working. Another 21% are angry, while only 28% are satisfied, and 2% are enthusiastic. In the aggregate, each of these measures has remained relatively stable over time, but the responses of subgroups have varied, particularly those of Democrats and Republicans, depending upon which party is in power. Republicans are currently much more pessimistic than Democrats.

“While one would always prefer to be ahead than behind, the news is not all rosy for McAuliffe,” said Dr. Harry Wilson, senior political analyst for the Roanoke College Poll. “Both candidates are above water in terms of favorable ratings, and each can improve on those numbers, or they may decline due to the percentage of voters who are at least somewhat unfamiliar with them. This election is not 2020, nor is it 2017.

Republicans are very unhappy with the state of the nation and the Commonwealth, much as Democrats were in 2017. While the 2017 exit poll is the best and only verifiable standard to use for statistical weighting to estimate the 2021 electorate, it is at least possible that Republicans can use their collective angst to increase turnout. We will measure voter enthusiasm in future polls to try to determine if that is the case.”

Regarding the different partisan views of just about everything, there is little left to say. The only thing they seem to agree on is their dislike of the other side and the fact that the nation is divided. Absent a cataclysmic event, that is unlikely to change soon.”

Interviewing for The Roanoke College Poll was conducted by The Institute for Policy and Opinion Research at Roanoke College in Salem, Virginia between Aug. 3 and Aug. 17, 2021. A total of 558 likely voters in Virginia were interviewed. Telephone interviews were conducted in English. The landline sample consisted of random-digit numbers generated in proportion to the Virginia population so that all residential telephone numbers, including unlisted numbers, had a known chance of inclusion. Cellphone samples were purchased from Marketing Systems Group. Cellphones comprised 45% of the completed interviews.

Likely voters were defined as respondents who said they are registered to vote in Virginia and who are very likely or somewhat likely to vote in the November elections.

Questions answered by the entire sample of 558 likely voters are subject to a sampling error of plus or minus approximately 4.2% at the 95% level of confidence. This means that in 95 out of 100 samples like the one used here, the results obtained should be no more than 4.2 percentage points above or below the figure that would be obtained by interviewing all Virginia likely voters who have a home telephone or a cellphone. Where the results of subgroups are reported, the sampling error is higher.

Quotas were used to ensure that different regions of the Commonwealth were proportionately represented. The data were statistically weighted for region, gender, race, education, and political party. Weighting was done to match the 2017 Virginia statewide election exit poll. The margin of error was not adjusted for design effects due to weighting. The design effect was 1.568 which would increase the margin of error to plus or minus 5.2%.

The Institute follows the American Association for Public Opinion Research’s Code of Professional Ethics and Practices and is a charter member of that association’s Transparency Initiative.

A copy of the questionnaire, topline, and crosstabs may be found on the IPOR web page.