This is a story that almost didn’t happen because, well, sometimes it’s just too hard to talk about someone you miss so fiercely. Ant B is a courageous woman.

“Today, I was into my stinkin’ thinkin’ mode and I just wasn’t sure that I could do this,” Ant B confessed. Sharing her husband’s story is still tough. “But when I got into my car, James Brown’s song I Feel Good came on and Steve loved that song so I said to myself, ‘O.K., I hear you! I can do this.”

Barbara Goodwin was nicknamed Ant B (Aunt Bee) by her husband, Steve Goodwin. She isn’t sure why this Andy Griffith persona became hers, but it certainly did for all who know her (most likely her kind and gentle spirit).

Ant B was married to Steve for 43 years. She described him as her “hero.” He was a Vietnam veteran and a true warrior against both heart disease and cancer. He adored his wife and their daughter, Alisa. He made people laugh – all the time – even when he was not well. “He was such a good person,” Ant B said. “He never wanted to talk about his ailments. He said it just brought him down.”

We met Ant B at New Freedom Farm in Buchanan, a sacred place for Steve, and now for her. “Everybody needs something to look forward to and Steve’s goal was always to go to the farm one more time,” Ant B explained. “That was his motivation.”

New Freedom Farm was established by Lois Fritz to offer hope to veterans and first responders. This refuge provides opportunities for them to help train rescued Mustangs, and it has become a source of emotional support and almost inexplicable refuge for those who visit. “When you drive through the gates, magic happens,” Ant B explained.

Lois said that Steve first came to the farm in the middle of Hurricane Matthew. “It was cold, rainy and muddy and, yet, he came back the next day and almost every day after.” She explained how she and Steve immediately connected and, in time, he became like a Dad to her (although as a Navy veteran herself, she often referred to him as an “Army slacker.”)

“We had many a chats inside the barn,” Lois said. “Every day, I go on because of him.”

In addition to Lois, Steve also quickly bonded with Maury, the mule on the farm, and adopted him as his soulmate. Ant B said that even with limited mobility, he would drive his golf cart into Maury’s pen, feed him carrots, and just talk to him.

Reminiscing about Steve on the farm was easy and the smiles were genuine. Lois and Ant B recalled the time they reconnected Steve with his former Vietnam veteran buddy, Matt Conner. Matt contacted Lois to orchestrate the details because he wanted the surprise reunion to take place at New Freedom Farm. To get Steve to the farm, Ant B  told him he was going to someone’s birthday party there. Instead, what he encountered was Matt driving down the long dirt road to the farm’s entrance, escorted by police cars with blue lights flashing. They had not seen each other since their time in Vietnam – 50 years ago!

They also remembered last Christmas when Steve could no longer get to the farm, so a group of them loaded up mini-horses, gathered his friends and took the farm to him, once again with blue lights flashing.

Clearly, Steve was special. He was also a fighter. He wrestled chemotherapy and immunotherapy for 5 ½ years before calling Good Sam.

“He did resist the hospice aide services for a while,” said Ant B, “but once he got to know them, it didn’t take long before he was saying ‘twice a week would be good!’”

“One of the most priceless gifts was Good Sam’s Memory Catchers program,” Ant B added. Their daughter, Alisa, brought a list of questions for her Dad and they recorded his answers. “You just don’t realize how much hearing someone’s voice means when they are no longer here,” Ant B said.

Ant B still comes to New Freedom Farm regularly. “I come out here just to be,” she said. “There’s something about the atmosphere that is freeing.” 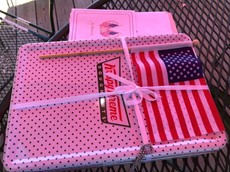 On this particular day, she brought Steve’s ashes with her. She wanted him close. She has them safely tucked into a Krispy Kreme tin. “He loved Krispy Kreme and with his connections to law enforcement, this seemed appropriate for now,” she said with a smile. Ultimately, Steve had requested his ashes be placed with Maury, the mule. “We’ll see,” Ant B said.

Regardless of where his ashes are placed, Ant B and Lois agree that Steve’s presence remains on the farm and that there have been mysterious signs confirming those beliefs. “Recently, we keep finding Big Red cinnamon gum wrappers around here,” Lois said. “That was Steve’s favorite.” “You can explain it away, I guess, but I don’t,” Ant B added. “Plus, he said he was going to do this. He told me, ‘you’ll know I’m around.’” 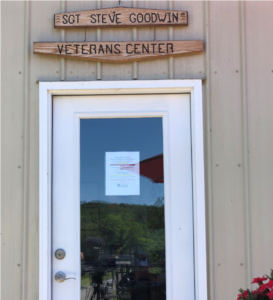 As you might guess, Lois was alongside Steve and Ant B until the very end. She promised Steve she would take care of Ant B. “And she does!” Ant B said emphatically.

Lois also named their newly built building that serves as the farm’s central gathering place, THE STEVE GOODWIN VETERANS CENTER… and it’s at this very place, sitting at a picnic table on a deck overlooking the mountains, where Ant B says “I can breathe here.”