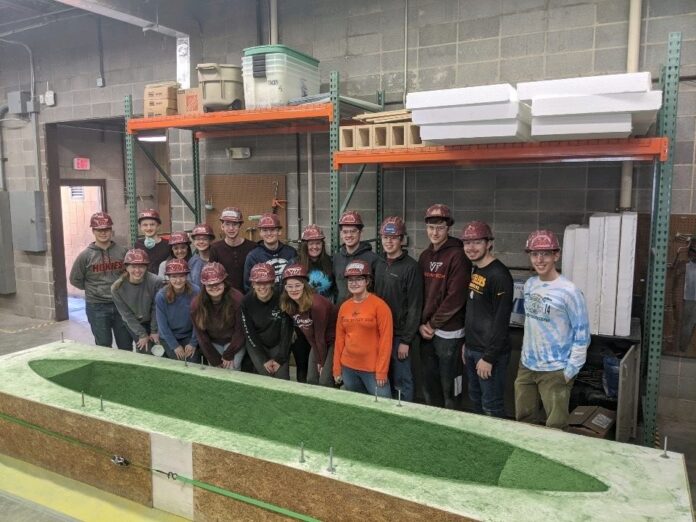 Concrete is heavy, which makes it strong and durable, so it’s considered a top choice as a material for construction projects, but not an ideal choice for a canoe because um,  . . . it sinks rather easily.

Each year, the Virginia Tech Concrete Canoe team takes on that challenge – of making something easily sinkable float – to build a canoe that will not only stay afloat, but can be raced in water.  And this year the team took home the championship in regional competition for the first time in 16 years.

During each competition cycle, the team designs, constructs, and races a 20-foot-long canoe made entirely out of concrete. The team spends about nine months designing the canoe’s hull, concrete mixture design, and mold form. Once the structural properties are identified, they test the concrete for its compressive, tensile, and flexural strength.

In the spring semester, the team forms the canoe. Concrete is hand placed and allowed to cure for 28 days. Normally, the team then takes the canoe to the regional competition, where they are judged on a technical paper, presentation, canoe appearance, and racing times.

Due to the pandemic, the 2021 competition was entirely virtual, which means the team did not get to race their canoe. Instead, the team was tasked with submitting only their proposal for the development of a standard canoe, explained team captain Jessica Viehman.

This included many of the same initial steps of performing structural calculations and mixture design calculations, but kept the team competing solely in theory.

“The team then developed a complete design report with the projected schedule and construction techniques that we presented via Zoom,” said Viehman.

“It was nice to be able to use what I’m learning in my classes to participate in a hands-on experience that relates to my future career,” said team captain Nawras Zalzala.

Virginia Tech’s team was smaller this year, with about 10 active members. Usually, there are up to 50 team members that are involved in all stages of the design and building process, but COVID-19 and the virtual work format made it difficult to recruit new members. Despite the smaller team, all of the team members agreed that the most worthwhile part of the experience was seeing their hard work pay off with a win in the regional conference.

“The most rewarding part was being able to virtually celebrate with my teammates,” said team captain Zachary Hill. “Bringing the win back to Virginia Tech after 16 years made the late nights, lack of sleep, and hard work worth it.”

In addition to the concrete canoe victory, a number of civil and environmental engineering students were honored with awards during the conference. Jessica Viehman won the 2021 ASCE VA Section Thompson Award Winner, which is given to an outstanding student in the state. Kelly Crocker and Rachel Johnson won the 2021 ASCE VA Section Scholarship. Delaney Snead won the Marr Technical Paper and the Hardy Cross Technical Presentation, which comes with the coveted Hardy Cross trophy, which will be held by Virginia Tech until the competition in 2022.