Growers on the Eastern Shore are more connected than most to the Chesapeake Bay. As stewards of the nearby land, these producers are vital to curbing the detrimental levels of nitrogen and phosphorus polluting the Bay.

Though an unprecedented amount of funding has now been made available to growers to adopt water-conservation practices, time-strapped Eastern Shore growers — many of whom have already implemented many of these practices — sometimes don’t have the bandwidth to navigate the programs and claim their own slice of funding.

That’s where Virginia Cooperative Extension agents Theresa Pittman and Ursula Deitch come in. With the future of the Chesapeake Bay in the balance, Pittman and Deitch are working with Eastern Shore growers to navigate the time-eating complexities of participating in the cost-share programs that take aim at nutrient pollution.

Over $1.5 million in funding available

Pittman and Deitch are connecting local growers with opportunities for funding from the state to implement agricultural best management practices on their farms. These BMPs aim to improve water quality in the Chesapeake Bay Watershed by tempering nutrient-carrying runoff that might reach the Bay from agricultural operations.

Soil and Water Conservation Districts around the state promote and track agricultural BMPs, which include practices to control cropland runoff, animal waste dispersal, streambank erosion, and improper use of fertilizers and pesticides.

Virginia farmers are encouraged to use BMPs with funding support from the Virginia Agricultural BMP Cost-Share Program. As part of the Chesapeake Bay Watershed Implementation Plan’s third phase, the Eastern Shore Soil and Water Conservation District was awarded over $1.5 million — the highest amount they’ve ever received — to administer the state agricultural BMP cost-share program.

According to Pittman, the Virginia Department of Conservation and Recreation has tasked the Eastern Shore with reducing nitrogen output by 38 percent. Twelve percent of that figure is specifically to be reduced within agriculture.

“Growers will need all the support they can get,” Pittman said.

Many growers on the Eastern Shore have already adopted BMPs like cover crops. But previously limited funding for the cost-share program meant many growers didn’t make the cut to join and expand their operation’s BMPs.

Now, the Eastern Shore Soil and Water Conservation District is urging local producers to apply, as they have a vastly better chance at funding than before and can use the cost-share funds to back BMPs not previously funded, like manure sheds for managing poultry waste.

“We really want to administer all the funding allocated,” said Carmie Savage, district manager for the Eastern Shore Soil and Water Conservation District. “It is important to be able to capture best management practices that some farmers have already been doing without financial incentives but also to fund new conservation practices and get those dollars on the ground so that Virginia can get credit for conservation practices being implemented on the Eastern Shore.” 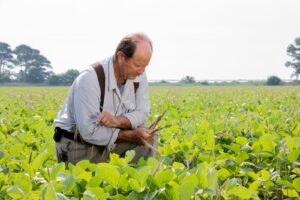 Pittman and Deitch know the difficulties of farming on the Eastern Shore. Both of them grew up with fathers who were growers in the area. They know first-hand the lifestyle and demands of these agricultural operations — and that farmers want to be good stewards of the land their livelihood depends on.

“When the connection is that deep, you don’t want to ruin the land,” Pittman said. “You want to be able to pass it on.”

In their role as Extension agents today, they’re simplifying the lives of local farmers, especially with the state BMP efforts. They keep farmers informed of the cost-share program and its new developments, answer questions about BMPs, and clear up misunderstandings, like the fact that the program is voluntary.

They also walk growers through how they can earn the cash incentives up for grabs. Under the current program, farmers receive funding for practices including cover crops, nutrient management planning, and no-till farming.

Pittman and Deitch work to empower growers by keeping them informed about the Chesapeake Bay Watershed Implementation Plan and how regulations coming out will affect them, acting as what Pittman calls “the main vector” for information.

They collaborate often with Mark Reiter, an associate professor and Extension specialist at Virginia Tech’s Eastern Shore Agricultural Research and Extension Center in Painter, Virginia. As Reiter studies practices that impact growers directly regarding fertilizer and poultry litter use along with innovative cover crop combinations, Pittman and Deitch share his research insights. For instance, an ongoing long-term cover crop project was implemented in 2014 to study nitrogen removal from the soil, to reduce possible nitrogen pollution to the Chesapeake Bay over winter, as well as possible nitrogen fertilization for the following corn crop within the system. Reiter’s group is working with other local partners, such as the USDA-Natural Resources Conservation Services, to demonstrate various types of cover crops and methodologies to ensure adequate yield as well as pollution remediation.

“It’s imperative that we work with local VCE extension agents to help us reach all local growers that may benefit from our applied research that we conduct at the Eastern Shore AREC,” says Reiter.

Because the agents are so embedded in the communities they serve, they often provide individualized, unique guidance to farmers. Pittman and Deitch aim to be a direct, trusted resource for the growers — and their deep roots in the community give them an advantage in that relationship-building process.

“When we got into this position, they knew us, but they also knew we weren’t making up what we knew,” Deitch said. “We didn’t have to fight to prove ourselves.”

The role of the Eastern Shore farmer

In fact, the first-time local farmer Lynn Gayle recalls seeing Pittman, she wasn’t an Extension agent. She was a young girl, driving a tractor down the highway with a big grin on her face.

Now, the Virginia Tech alumnus leans on Pittman and Deitch for insight and help implementing environmentally-conscious programs. Gayle, who graduated with a bachelor’s degree in 1975 and a master’s degree in 1982, even calls on the agents for everyday issues: Once, after an update to Microsoft Access rendered the program unusable for Gayle, Pittman “came in as an Extension agent and made it work,” Gayle said.

“These two ladies are in on it,” Gayle said. “They’re pumping out information. They’re out in the field, working with us, offering programs.”

Gayle has been a farmer in the area since 1982 — the year before the U.S. Environmental Protection Agency signed the first Chesapeake Bay Agreement to try and tackle the Bay’s rising nutrient pollution.

Today, as a farmer on 2,500-acre Mt. Nebo Farms, Gayle is working with the Extension agents to join in on the state’s cost-share funding. Gayle, like many Eastern Shore farmers, already utilizes conservation practices, including soil sampling, planting cover crops, using a precision planter, and using a precision sprayer to do a “burn-down,” which involves applying a single application of a herbicide to clean a field.

Programs like this are crucial for the health of the Chesapeake Bay, yet can come at significant expense to farmers, and not all of the practices are eligible for cost-share funding. For example, Gayle’s precision planter alone cost him $120,000.

Over time, these BMPs and precision agriculture machines will pay for themselves through improved soil health and quality of production as well as savings in chemical and seed costs, time, and fuel. But stomaching up-front costs and changes to the farm plan can be difficult for stretched-thin farmers.

That’s where Pittman and Deitch come in, providing the latest research, tracking down and navigating funding opportunities, and leveraging the resources of Virginia Tech. The agents help growers clear hurdles in the path of adopting water-conscious practices — something Pittman and Deitch note Eastern Shore growers are generally already motivated to do.

Gayle, who also moonlights as a charter boat tour captain in the Chesapeake Bay, only has to think of his granddaughter and her future on the Eastern Shore to be reminded of his crucial role in safeguarding the future of the Chesapeake Bay.

“I do what I do here because I know it’s better,” Gayle said. “Certainly the bay, and of course the ocean, has a significant impact on what goes on the Shore.”

When he goes out on his charter boat tours, he looks down in the water. He sees the changes, the thickening of the grasses — sometimes growing so steadily he can’t anchor. But that’s a good thing: The more grass, the better, he said. It’s a sure sign that the bay can recover, returning to its original glory.

Written by Erica Corder, with original reporting by Suzanne Irby