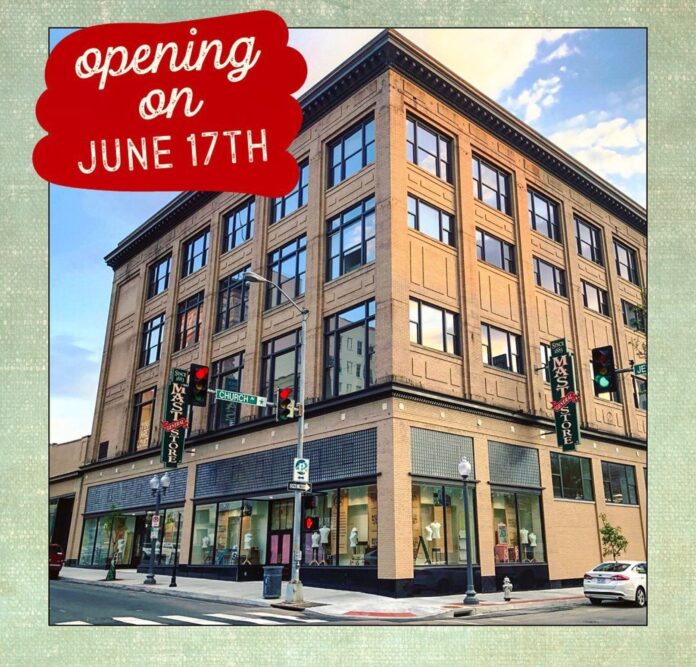 On June 17, the Mast General Store, based in Valle Crucis, North Carolina, will open its Downtown Roanoke location. It is the family of stores eleventh shop and the first in Virginia.

“We are very excited to share the store with our guests, who have been so patient as our opening was delayed by the COVID-19 outbreak,” said Lisa Cooper, president of the Mast General Store. “This location was a downtown destination for decades, and we look forward to being a part of the continued re-emergence of the downtown area here in Roanoke.”

Located at 401 South Jefferson Street, Mast Store’s new “old” location has an interesting history encompassing some of the Roanoke’s well-known entrepreneurs and visionaries. It was built in 1915 as the new home for Thurman & Boone Furniture Co. and also provided space for the S. H. Heironimus Store until it moved to another location for a number of years. After maintaining a location in the MacBain Building, Heirnoimus returned in 1955, signing a lease with the Edgar A. Thurman Trust and launching plans to make it an ultra-modern department store.

“All of our buildings have interesting stories to tell about their hometowns,” continued Cooper. “We learned that the escalators in this building were a part of the renovations made as Heironimus was preparing to move back in. They were the first ones in the Roanoke area.”

The Mast Store also strives to tell the region’s story through items on their shelves. Some of the items made nearby include Swallowtail Tea, JT Copper syrups, and grits and mixes from the historic Byrd Mill.

The store employs 23 people with nine of them being full time. Three employees transferred from other locations to be a part of the management team in Roanoke.*

It is located near the historic Downtown Roanoke Market, which has been open and serving the area since the 1880s. There are many small businesses, restaurants, parks, and museums within walking distance of the store that are wonderful assets to downtown and the region, and it is centrally located to many of the city’s events.

“We are excited by the welcome we’ve received in Roanoke and are looking forward to becoming a part of this community,” said Cooper. “The staff is energetic and ready to share the traditions of an old general store.”

With the opening occurring during Phase 2 of Virginia’s re-opening after the COVID-19 pandemic, customers and guests should remember that they are required to wear masks as directed by Governor Northam. Other requirement for shopping can be found in the Virginia Forward Phase Two Guidelines (starting on page 17)**.

The Original Mast General Store was built in 1883 and is located in Valle Crucis, NC. It is listed on the National Register of Historic Places as one of the best remaining examples of an old country general store.

The Mast Store Annex, once a competing general store, is also in Valle Crucis. Other locations are in Waynesville, Hendersonville, Asheville, and Winston-Salem, North Carolina; Greenville and Columbia, South Carolina; and Knoxville, Tennessee. The Mast Store is an employee-owned company.

For more information about the Mast Store in Roanoke, click over to www.MastGeneralStore.com or call 540-566-5661.