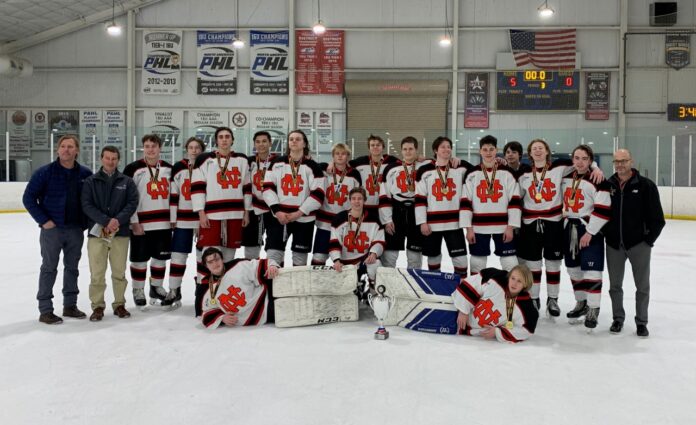 The North Cross School Club Ice Hockey team is the least popular sport on campus—for now. In its first year, it has just four players from the school, but they got a boost in numbers by adding interested players from area high schools including Roanoke Catholic, Salem High School, Lord Botetourt, Patrick Henry, Cave Spring, and Northside. For what they lack in popularity, they make up for in wins.

Last Saturday, the team traveled to Pittsburgh to compete in their first tournament of the season with head coach Paul Haskins who teamed up with assistant coach Damon Kuehl and Roanoke Junior Rail Yard Dawgs U16 travel team head coach Steve Esworthy as the remaining assistant coach.

What happened there made history as they defeated the Miami of Ohio Red Hawks 12-3 in their first tier of tournament play. They went on Sunday to defeat Chatterton High School, 9-0. Monday afternoon, the team, which is composed primarily of U16 players, would be pitted against the very team that the Raiders had defeated 3-2 earlier that day for the finals: the Pittsburgh Vipers U18 team. After the first two periods passed scoreless, the North Cross team scored 5 goals in the last period to take the win and the title.

They returned to campus not only victorious but justified in bringing high school hockey back to the region after 30 years. The team trains at the Lancerlot Sports Complex in Vinton and there the school has also established a Learn to Skate program this season to encourage students in all grade levels to lace up and get on the ice with hopes of bringing more Raiders to the ice hockey ranks in future years.