Roanoke City Recognizes Childress as 2019 Citizen of the Year 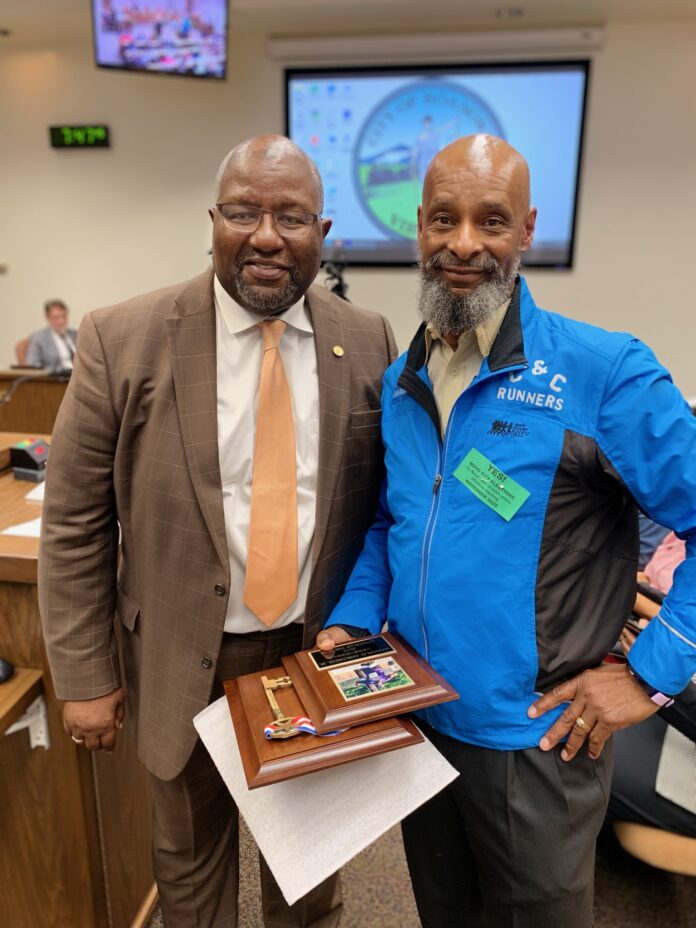 Roanoke City Council has named Marion D. Childress, Jr. as the 2019 Citizen of the Year for the City of Roanoke. In recognition of this honor, Mayor Sherman P. Lea presented him with a Key to the City and a resolution commending his service to the community at the Nov. 18 City Council meeting.

City Council recognized Childress for his outstanding accomplishments that encourage people from all walks of life and levels of fitness to connect and empower each other through running and walking and, in so doing, make our City a stronger, more supportive community. As a husband, father, grandfather, runner, and cheerleader, he serves as a model and inspiration for all citizens of Roanoke through his humble, self-effacing support to his fellow runners and walkers.

Childress is a Roanoke native and a 1971 graduate of Lucy Addison High School. He served his Country in the United States Army for 23 years, and continues his public service through his employment at the U.S. Department of Veteran Affairs in Salem. During his Army days, Childress developed a passion for running that continues to this day. He founded C&C Runners/C&C Walkers to encourage and promote participation in physical activity.

He has set a personal goal of running in 1,000 races and has exceeded 825, including regional races such as the Drumstick Dash; Spooky Sprint; Urban Challenge (WazUpwitdis); Blue Ridge Marathon; Richmond Marathon; and Christmas Eve Fun Run; and several national marathons and half-marathons.

His commitment to running for health and spirit remained unwavering through his arduous battle with cancer that began in 2012, culminated with remission in 2015. Childress has received several recognitions and honors including the 2015 national  Mizuno Power to Inspire Award, designation as the 2014 Unofficial Running Ambassador of the Roanoke Valley in 2014, and acknowledgement as the Ambassador of Roanoke Running by Roanoker Magazine.