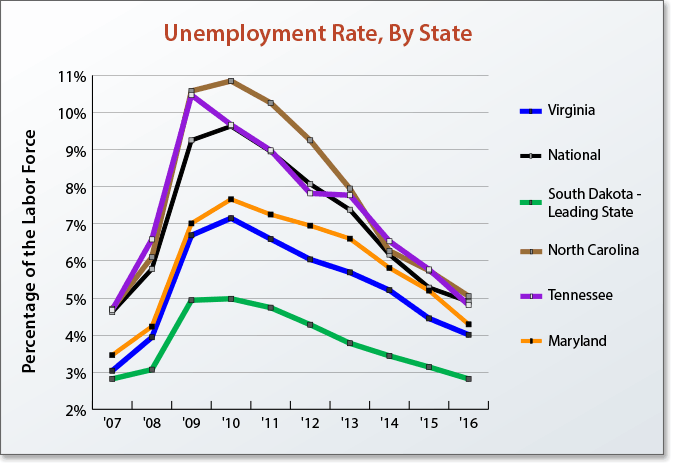 “This report is a great sign that our efforts to build an inclusive and diverse economy are yielding positive results, whether reflected by the decrease in our unemployment rate, the continued growth of our labor force, or Virginia reclaiming the title of ‘Top State for Business’ in CNBC’s annual ranking announced earlier this month,” said Governor Northam. “My administration will stay focused on attracting new capital investment, supporting existing companies looking to expand in Virginia, creating well-paying jobs, and bolstering our workforce so that we can keep our economic momentum moving forward and ensure that all communities, and all Virginians have an opportunity to share in the Commonwealth’s success.”

Virginia has the lowest seasonally adjusted unemployment rate among the Southeast states. Virginia has the third best rate among the states east of the Mississippi along with Wisconsin. Virginia is ranked sixth in the nation for the seasonally adjusted unemployment rate along with South Dakota and Wisconsin.

“It has been a busy month for the Commonwealth, and we’re pleased to see our unemployment rate drop to 2.9 percent,” said Secretary of Commerce and Trade Brian Ball. “We’re also very proud that Virginia was just named the best state to do business in the nation. While there’s work to be done, this administration remains committed to using every tool we have to ensure that all Virginians can participate in our economic progress.”

“Today’s announcement serves to remind that Virginia’s recent ranking as America’s ‘Top State for Business’ is in large part due to our world-class workforce,” said Chief Workforce Development Advisor Megan Healy. “Thanks to Governor Northam’s thoughtful investments in education and training opportunities, more Virginians than ever are earning skills that prepare them for quality jobs in high demand industries. The Northam administration will continue to prioritize the development of an inclusive, diverse economy that benefits both our workers and businesses.”

For a greater statistical breakdown visit the Virginia Employment Commission’s website at www.vec.virginia.gov.