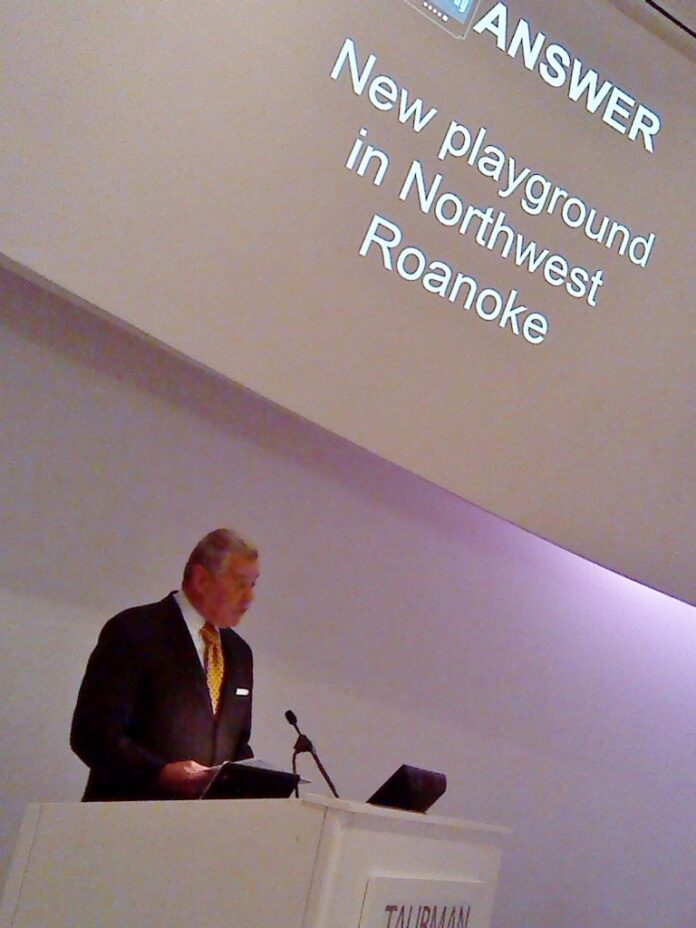 Roanoke Mayor David Bowers ticked off a list of accomplishments for the Star City during the annual State of the City address, held at the Taubman Museum last Friday. Then citing a comment he has heard from City Manager Chris Morrill, Bowers then declared, “We’ve changed the way Roanokers think about themselves – and we’re not going back to the past.”

Delivering a list of highlights as if he were the host of the game show Jeopardy! Bowers began by saying “This will arrive in Roanoke in the next couple of years, coming down the line from Washington and Lynchburg.” The answer? “What is Amtrak?” added the mayor.

In rapid fire he added the full accreditation of William Fleming High School, the new Elmwood Park Amphitheater, a 26 million dollar expansion at Virginia Western Community College and the new Countryside Park. The mayor wasn’t done: a move by FedEx Ground to the Roanoke Centre for Industry and Technology that brought 108 jobs and a 12 million dollar investment was next.

The $30 million renovation of Center in the Square, new downtown living quarters at the Ponce De Leon (which cut the ribbon a week earlier) and the former Shenandoah Building (now Parkway 301) got a mention. “This project helped to transform one of America’s most pleasurable public spaces into an even nicer and up-to-date public space,” Bowers continued, “while still maintaining the flavor of being an Appalachian Farmer’s Market …the question is, what is the Roanoke City Market [and the new Market Square plaza].”

Virginia Tech Carilion Medical School’s first graduating class in May got a mention. “We are very proud of that accomplishment,” said Bowers. The new hotel being built atop the City Market garage and renovations at the main public library branch downtown were next up. The “award-winning” Parks and Arts program that has brought culture to many of the city’s neighborhood parks got a mention.

Bowers drew applause when he brought up the crime rate in Roanoke, which he said was the “lowest in 47 years.” The crime rate in Roanoke and how it was rated as a safe place to live sparked a contentious debate in the run up to May’s City Council election, with Police Chief Chris Perkins drawn into the fray defending the city’s police force.

There are challenges ahead said the mayor, who wants to keep pushing the ACT initiative he proposed at the 2013 State of the City: that’s promotion of Academic economic development, Cultural economic development and Tourism economic development. The establishment of more workspaces for entrepreneurs and growth for Virginia Western’s culinary arts program are on his agenda.

Bowers pushed for the construction of I-73 from Roanoke to Greensboro and beyond, although that could still be decades away, and he advocated for excursion trains to come here from Richmond and Bristol. One would bring legislators from the capitol “to [see] how important it is for their support and investment in this major city of Western Virginia.” The excursion from Bristol might help promote passenger rail service to Southwest Virginia once it arrives in Roanoke by 2017.

Bowers also wants to see more programs from Radford University come to Roanoke, and discussions are underway now he said for a joint program that would involve the Washington & Lee law school and the Virginia Tech Carilion medical school.

“Despite all of our problems and serious obligations for the future there is a lot to be proud of and joyful about here,” concluded Bowers, “[and] we should after all feel good about our Grand city.”