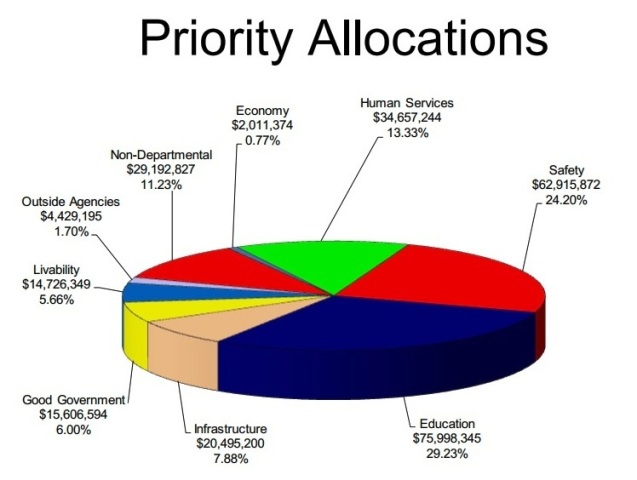 A surprise increase of over million of projected revenue balanced Roanoke City’s 2014 fiscal year budget. The additional revenue will fund items that exceeded the budget at Council’s April 1 budget briefing.

The budget projection increases primarily came from expected growth in property and business taxes, as well as an increase in Health and Welfare funding from the Commonwealth.

City employees will get a 2% pay raise overall. The budget includes market adjustment increases for maintenance workers, and an increase in the starting pay for police officers and Fire-EMS personnel. Retirees will receive a 1.4% cost of living increase. Two positions in Billing and Collections will go unfunded.

A big help in balancing the budget this year was the elimination of the “Aid to Localities” that was a mandated gift back to the state to balance their budget. This added $1.2 million to the city’s coffers.

Expect a new fee of $3 to be implemented for overnight parking in garages. This fee is in anticipation of the hotel being built over the Church Avenue garage. City Council voted to help with improvements to the hotel for “utility installation” in the amount of $350,000.

Capital funding for the Library Master Plan was pushed out a year and the Parks and Recreation Master Plan had $500,000 defunded for three years. Streetscapes and the Civic Center’s capital needs were also reduced.

The reductions and postponements for funding the Master Plan made it possible to aid the Jefferson Center and the Virginia Museum of Transportation. They will each receive $100,000 annually for five years. The Jefferson Center must match the funds as a contingency and VMT must secure funding from other localities. One time cash funding for 2014 was used for the first installment on both.

The debt policy is precariously close to the limit of 10% of total expenditures in 2018 and especially in 2019 when it reaches 9.99%. Shawver stressed that the projections are based on no growth and that if it looks like the 10% limit will be breached there is always the option to delay or reduce the amount for capital projects in future years.

The capital improvement request to expand Round Hill School is not funded until 2016. The extra $3.5 million is half of the requested $7 million. The other half that remains unfunded is for the renovation of the existing Round Hill classrooms.

A public hearing for citizens will be held Thursday April 25 at 7:00 p.m. in City Council chambers. The budget presentation and document can be viewed on the city’s website at www.roanokeva.gov.