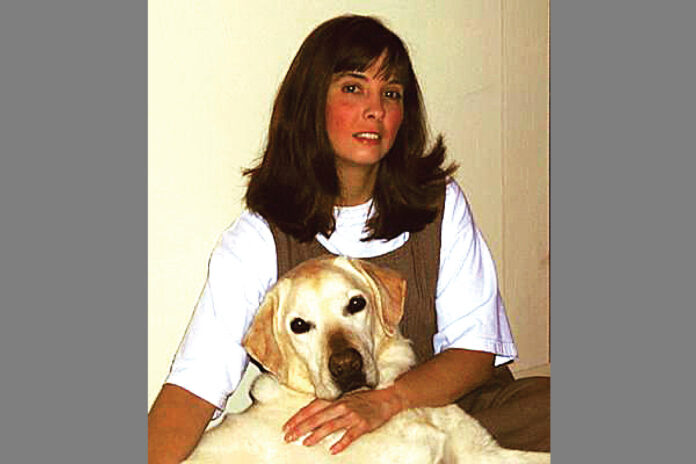 A dog is more than “man’s best friend” to a person with a disability.  Author Leigh Brill says her first service dog, Slugger, helped her physically, emotionally, and socially. Service dogs perform physical tasks but “part of it — the bond between the dog and their human partner — is their unconditional love and acceptance that they offer.”  The Roanoke County woman has congenital cerebral palsy, and she says before having a service dog, strangers would stare or whisper negative things about why she walked funny.  But now they see the dog, not the disability.  “So it changed what was negative into something very positive.”

Slugger had such an effect on her life that she wrote about him in “A Dog Named Slugger:  The True Story of a Service Dog that Changed My Life.”  This is her first book, although Brill is a published author, having written dog-themed stories for magazines and the “Chicken Soup for the Soul” series.

“Slugger made a life changing impact for me and I felt like I wanted to share that. And I think even at a spiritual level if you want to call it that, I felt like that was the least I could do to share the difference that he’d made for me.  I told him when he was sick, that I would make sure that all the gifts that he shared with me would continue, and writing was a way I was able to do that.”

The book has been out for about six weeks and she’s been pleased by the reviews. Booklist recommends “A Dog Named Slugger” for middle and high school readers.  Brill has been interviewed by “Just Labs” magazine and the book will be featured in Follett’s First Choice catalog in August.

She says writing “A Dog Named Slugger” was cathartic for her personally as well as an author.  “Slugger’s story is his story, it’s my story, it’s Kenda’s (her current service dog) story, and it’s a story of folks who were a part of our life.  But I hope this will also make a difference for other folks with disabilities, either those who already have service dogs or maybe folks who may be considering getting service dogs to help with different challenges that they might have.”

She says most people have said they love her book but it made them cry, referring to the final chapter which deals with Slugger’s death.  Brill said that was a difficult part of the book to write.

She delayed writing the last chapter for awhile, but then when she couldn’t delay any longer, “I warned all my close friends, my family, my spouse, everybody. I said, ‘I’m not going to be myself for the next few days.’”  During the next two to three days as she “got it out,” she sobbed, wrote a line or a paragraph, sobbed, and then wrote some more, until she was done.   “The only way I could write that chapter was to remember the impact that Slugger had for me and to realize that doing his story justice involved writing that part, too.”  She still can’t read that chapter.

Her current service dog, Kenda, was by her side as she wrote the tribute to Slugger.  Brill says sometimes Kenda would bring her a tennis ball, encouraging her to take a break or provide emotional support during the tough times.

Brill is currently working on the first in a series of children’s books about a 10-year-old girl detective who solves mysteries with the help of her service dog. She hopes to be able to visit middle and high school classes after they read the book and answer any questions about Slugger, disabilities, and service dogs.

Leigh Brill’s book can be purchased at leighbrill.com and online at Amazon.