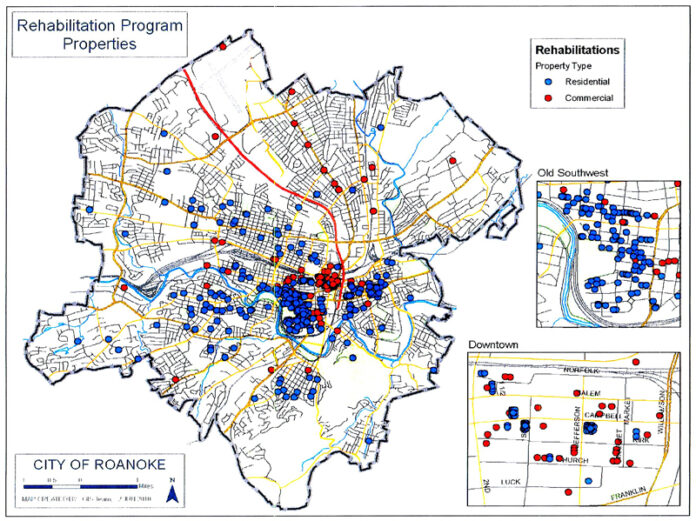 The last council meeting on June 21 is looking like a late night for outgoing council members Gwen Mason and Rupert Cutler. Four hanging chads are yet to be decided before Ray Ferris, Bill Bestpitch and incumbent Dave Trinkle take office July 1.

Public hearings for the 7 p.m. meeting on June 21 include: the acceptance of the offer for the Buena Vista Community Center, downtown vendor carts, real estate tax abatement program modifications, and the Mill Mountain easement boundary.

Buena Vista Community Center’s sale to Scott and Ascension Horchler of Richmond for $75,000 is expected to go smoothly. The buyer and representatives met with the Southeast Action Forum on June 2 to reassure the neighborhood of their intentions. The Horchlers plan to live in the historic plantation style home on three of the available twelve acres after renovation. They will lease out the reception hall for weddings and other gatherings.

The real estate tax abatement program rewards rehabilitation of old dilapidated structures by maintaining the property’s original assessed value. The length of time varies depending on the use of the structure. The tax abatement program modification will eliminate the five-year incentive for conversion of apartments to single family dwellings. It will also reduce the 10-year abatement to eight years in historic districts. The property must be improved at least 40 percent higher than its original assessed value.

The chess game with downtown vendor carts will come to an end on June 21. There will be two options for council to consider – carts in downtown, carts in parks and on greenways only, or council can opt for no carts at all near term. Two public input sessions were held on the plans.

Last, but arguably the most sensitive issue, is the Mill Mountain easement boundary. At council’s Monday morning briefing, Assistant City Manager Brian Townsend did a quick rehash of the two boundary options. Both options allow for an expansion of the Mill Mountain Zoo.  One option includes in the easement the once hotly debated Rockledge acreage, and the other option excludes it. About 28.8 acres of the 568 acres would be excluded from the easement on top of the mountain.

Other outstanding issues expected to be addressed June 21 include the three competing offers for Fire Station No. 5. Council had also requested a market renovation plan summary. Renovations are set to begin in September. Townsend says “they’ll fit it in somewhere.”