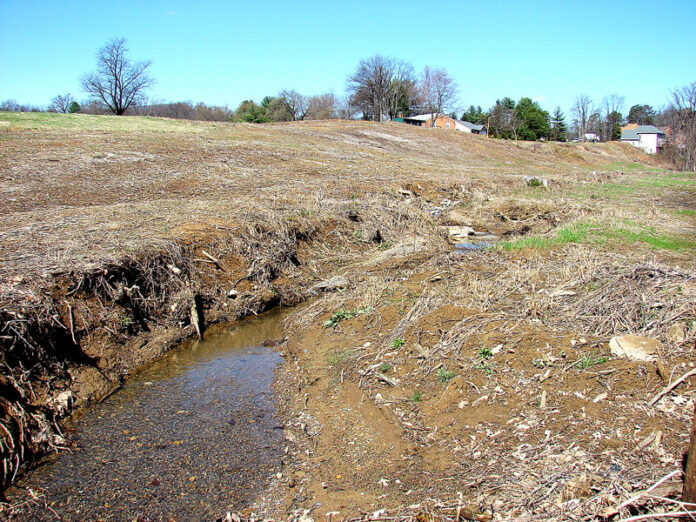 Excuses from Roanoke Regional Airport Projects and Environmental Coordinator, Alex Plaza, did not fly with Roanoke City’s Civil Engineer Joseph Johnson-Koroma Monday morning. When pressured to answer why the Roanoke Regional Airport Authority expected to not be held to the same erosion and sediment control standards as any other contractor, Plaza had no answer.

There was no permit obtained as Plaza insisted that “there was no land disturbance.” Plaza further explained that vegetation was left on the banks of the creek bed and seeding took place after the clear cutting by the contractor in the summer of 2009. The vegetation subsequently died, along with the initial seeding.

Plaza did not agree with Johnson-Koroma that the debris washed down from airport property to the low bridge at what was once the 3rd tee of Countryside golf course along Frontage road. He argued that “this [debris] does not all come from that up there [airport property].” Johnson responded, “it’s already down here.”

Roanoke Regional Airport Authority cleared all vegetation from the runway 6 RPZ (Runway Protection Zone). Sediment eventually flows into Lick Run creek that leads to the Roanoke River. The whole area along Frontage road between Peters Creek and Hershberger is in a flood zone.

The location is just down from the old Johnson and Johnson building now partly occupied by ADMMicro.

The local DEQ (Department of Environmental Quality) Erosion and Sediment Control, Department of Conservation and Recreation in Clarksville received a complaint in December 2009. Dan Repella, a field worker and Compliance Specialist at the New River Watershed Office in Christiansburg, was contacted.

There is a gray area over jurisdiction since the airport property is federally owned. Federal money purchased the land when the ROA expanded in the 1980’s. Federal money also continues to be designated for noise abatement for homes affected by the noise contour expansion.

Plaza reluctantly heeded Johnson’s insistence to barricade the erosion until the land was stabilized. Plaza said there would be additional hydroseeding for the spring growing season. Two previous attempts at seeding have failed to grow even minimal grass.

Plaza said he would have the debris cleared and the erosion control barrier in place in a couple of weeks. Johnson made it clear that “he would come back to check.”

“There will be more trees cut,” according to Plaza.