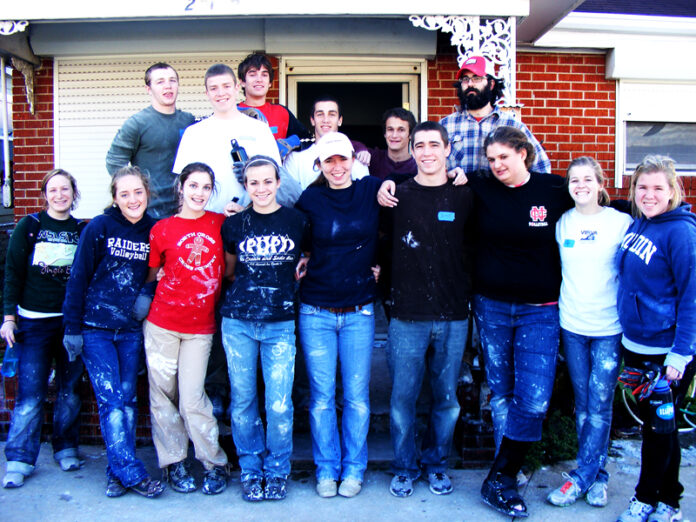 Schools and churches often organize mission work groups for young people, but rarely do we hear of young people themselves planning and fund-raising for a worthy project. Last summer sixteen-year-old Jonathan Mitchell and his friend, Kaki Comer, started to talked about their concerns about the problems that continue to plague New Orleans post  Katrina. They decided they would like to go and do what they could to help. The more they considered it, the more they were convinced they should act on their feelings.

They began talking  about it with their classmates at North Cross. Eleven more students committed to join Jonathan and Kaki in their  venture. Jonathan’s older sister Lindsay and her husband, Josh Eernisse, agreed to go as chaperones. Jonathan contacted the Episcopal Diocese of Louisiana, who supplied a house for the group to use and set up their work project. Now all they needed was money to finance the trip.

Josh works at a print shop, and with his help the group produced tee-shirts with NOLA on the back. “NO” stands for New Orleans while “LA” stands for Louisiana.The “O” is a picture of the world; the “L” depicts a map of the state. They sold 170 shirts at a profit of $7.00 each. This income, their own personal donations, plus support from Raleigh Court Presbyterian Church and other fundraisers gave them the funds they needed to go to New Orleans and work December 18th through December 23rd.

Their work project was to help rebuild an apartment building with three units. The owner, Mr. Hammond, said he had to go into the attic and dig a hole in the roof so he could be rescued when the flood waters filled his house. Unfortunately, he had not received any funds from FEMA because the building was not a one-family unit. The New York Times interviewed him because of his efforts to raise money for rebuilding by collecting and selling aluminum cans. Jonathan remembered hearing his story and was pleased to be able to help him. The group  of students painted, sanded walls, installed drywall in the bathrooms and began tiling the floors.

Jonathan said the only scary thing that happened occurred the first night they were there. As they left the house to buy groceries for their stay, one of the girls noticed a pilot light burning on the gas stove. She did not understand about gas stoves and pilot lights, and thinking someone left the stove on, she blew it out. When they returned, the strong smell of gas alerted them and they had to stay out of the building 45 minutes for the air to clear.

They also had a pleasant surprise in the airport as they awaited their flight to New Orleans. A man asked the meaning of the logo on their shirts. When they explained about their mission trip, he wanted to do something to reward their commitment to help. He happened to be a referee for the New Orleans Bowl, and arranged to get  them tickets to the game on Sunday, December 20th.  No “small” good deed ever goes unrewarded!