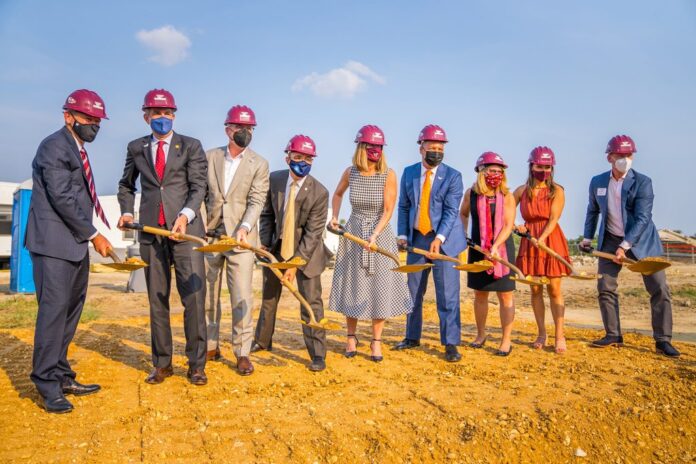 During a groundbreaking ceremony for the campus’ first academic building in Alexandria, a host of top government, university, and business leaders, including Virginia Tech President Tim Sands and Virginia Gov. Ralph Northam, lauded the Innovation Campus for its mission to solve the nation and commonwealth’s critical needs for tech talent.

They spoke to a crowd of more than 200 supporters, all gathered under a large white tent at the campus’ construction site on Potomac Avenue.

“It’s a day many years in the making, made possible by a broad group of partners who were willing to support a bold vision to advance research, graduate education, and community engagement in the greater Washington, D.C., metro area,” Sands said.

Lance Collins, vice president and executive director of the Innovation Campus, joined Virginia Tech last year with a goal of creating a diverse graduate campus that offers graduate programs in computer engineering and computer science and project-based initiatives that embed industry leaders with students and faculty.

“Our vision for the Innovation Campus is to be both a place and a culture that unlocks the power of diverse people and ideas to solve the world’s most pressing problems through technology,” he said. “Diversity isn’t just a core value to me. It is a measure of excellence that will ensure the Innovation Campus delivers on its full potential.”

The campus’ first gem-shaped academic building, at 300,000-square-feet, will be built on an approximately 3.5-acre campus in the first phase of a new mixed-use development and innovation district that JBG SMITH is developing in North Potomac Yard near the future Potomac Yard Metrorail Station. The building’s design is focused on principles of sustainability, health and wellness, green and social spaces, accessibility, connectivity, flexibility, and integrated technology.

The university expects to welcome students, faculty, and staff into the completed building in the fall of 2024. Plans call for two other campus buildings, measuring about 150,000 square feet each, to be built as the campus grows. Meanwhile, graduate classes are being held at the university’s Northern Virginia Center in Falls Church.

The Innovation Campus was part of the state’s Tech Talent Investment Program that attracted Amazon to Virginia, and its mission is essential to the state’s economy.

“We always knew it would be more than a traditional graduate program,” said Northam during the ceremony. “This is becoming exactly what we envisioned in 2018, a place where academia, government, and industry connect.”

In May, Boeing announced that it would invest $50 million as the Innovation Campus’ first foundational partner. The aerospace company’s gift will create scholarships, help with recruiting faculty and researchers, and fund STEM pathway programs for underserved K-12 students.

“We are underwriting the diversity of this student population,” said David Calhoun, a Virginia Tech alumnus and CEO of Boeing, during the ceremony.

Already, the campus is attracting students from a variety of backgrounds, including Tara Laughlin, who studied both computer science and creative technologies as an undergraduate at Virginia Tech. She just began her first semester in the Innovation Campus master of engineering, computer systems and applications program, and she wants to use her love of art and people to improve technology access.

“I am passionate about the software I develop, but the thing I care about the most is people. I care about how people interact with software, and how will they understand how to use it,” said Laughlin, who is one of seven Boeing Graduate Scholars, during the ceremony. “The Innovation Campus answers everything I wanted.”

Students like Laughlin epitomize the mission of the Innovation Campus, said Julia Ross, who is Paul and Dorothea Torgersen Dean of Engineering at Virginia Tech.

“It’s about building many pathways to open doors and provide opportunities for students like Tara who may not fit traditional graduate school molds,” she said. “It’s imperative that our student body reflects the commonwealth and the global communities we serve.”