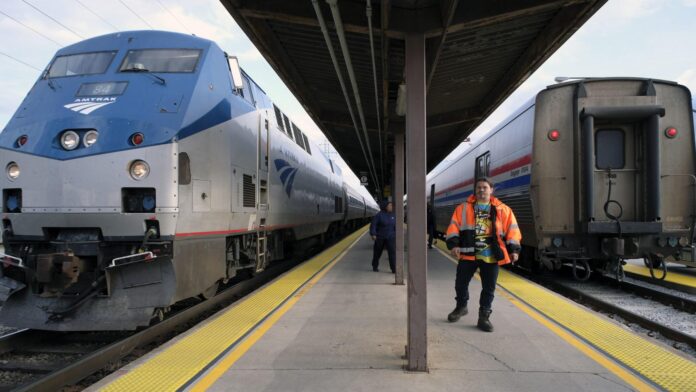 The State of Virginia and the Norfolk Southern Railway have reached and agreement to extend passenger rail service to the New River Valley for the first time since 1979. Known as the Western Rail Initiative, this agreement will increase intercity passenger rail service from Roanoke to the Northeast Corridor and is an expansion of the Transforming Rail in Virginia program to build a 21st-century rail network.
The $257.2 million Western Rail Initiative includes:
The agreement includes both an increase of existing service and expansion of service to the New River Valley. In 2022, an additional round-trip train to Roanoke will depart Washington, D.C., in the morning and serve Alexandria, Burke, Manassas, Culpeper, Charlottesville, Lynchburg, and Roanoke. The expansion complements the existing Amtrak Northeast Corridor service, which travels northbound from Roanoke in the morning and returns in the afternoon. The two Northeast Corridor round trips will be extended from Roanoke to Christiansburg upon completion of the infrastructure improvements in 2025.
The Commonwealth and Norfolk Southern will continue to work to finalize definitive legal agreements, with execution planned by the end of 2021.
“Today is a good day and we look forward to working with all stakeholders to put today’s announcement into action,” said James A. Squires, Chairman, President, and CEO of Norfolk Southern. “Virginia and Norfolk Southern worked cooperatively to reach the Commonwealth’s goal of expanding passenger rail service in the New River Valley, while also preserving the vital role these lines play in delivering goods and materials that drive the regional economy.”
“I have seen firsthand the economic benefits of passenger rail in this region of Virginia,” said Secretary of Transportation Shannon Valentine, who led the legislative effort to launch the first state-supported passenger train anchored in Lynchburg. “In 2017, we extended the train to Roanoke, and today to the New River Valley, creating vital connections in our statewide rail plan.”
“The Commonwealth values our long-term partnership with Norfolk Southern and look forward to continuing to partner with them to advance both passenger and freight rail,” said Jennifer Mitchell, Director of the Department of Rail and Public Transportation. “As we move forward, we will work closely with local partners to support passenger rail in the New River Valley.”
The New River Valley Passenger Rail Station Authority was also created to assist the Commonwealth with the creation of and support for passenger rail in the region. The Authority is being established in Planning District 4 and will be governed by a board consisting of members of each participating locality and institution of higher education.
The Commonwealth plans to partner with the members of the New River Valley Passenger Rail Station Authority to fund the construction of a station building, parking, and roadway access for the station.
“The people of the New River Valley have demanded passenger rail for years because they know what an economic boon it will be for their community,” said Senator John Edwards. “It will make it easier for students to attend Virginia Tech, for families to visit, and for Hokie alumni to return for game days and events throughout the year. This service also forms a vital connection to Virginia Tech’s Innovation Campus in Arlington, and will be a second train each day through Roanoke, which has been one of the most successful lines in the country since it launched in 2017. “
Ridership forecasts for the region indicate a healthy demand for service. Today, the Roanoke train provides 220,000 passenger trips per year. The new service is expected to add approximately 80,000 new passengers in the first year. This service will provide multimodal alternatives to travelers along the Interstate 81 and Route 29 corridor, serving tens of thousands of residents and visitors to the region.
The 2021 state budget provided $83.5 million to support the extension of intercity passenger rail service from Roanoke to the Blacksburg-Christiansburg area and increase the frequency of intercity passenger rail service along the I-81/Route 29 corridor from Washington, D.C.
To meet the requirements of the provided funding, Norfolk Southern will conduct an operational analysis of potential infrastructure improvements required for a future station at Bedford, which would be subject to future funding availability, and the Commonwealth will assess the cost of extending intercity passenger rail to Bristol.
The Commonwealth’s previously announced $3.7 billion Transforming Rail in Virginia initiative will expand and improve passenger, commuter, and freight rail in Virginia and create a vital connection in America’s national rail network between the Northeast and Southeast corridors.
The initiative is expected to grow Virginia’s economy by $2 billion annually and improve the mobility of passenger and freight rail. According to the American Public Transportation Association, every $1 billion invested in rail creates 24,000 highly skilled jobs, and every $1 invested generates $4 in wider economic benefits.
For more information about the Transforming Rail in Virginia initiative, please visit drpt.virginia.gov/rail/transforming-rail-in-virginia.