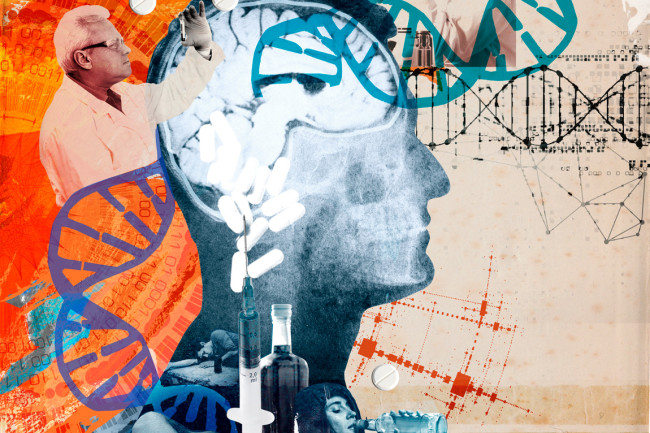 The treatment of drug addiction and alcoholism has long turned into a separate branch of medicine and spawned an entire industry, but scientists still have a poor understanding of how painful addiction occurs. It is clear that addiction should be treated in rehabs or at NA support groups on AddictionResource, but the understanding of its nature is also important. And recent research in this area indicates that addictive behavior may be at the genetic level.

Studying the ancient retrovirus HK2, which is rarely present in the genetic code of people, they found that it is found several times more often in the DNA of drug addicts.

According to scientists, this serves as an indication that addiction may be encoded in genes – however, exactly how this mechanism works remains to be seen.

Human endogenous retroviruses (HERVs) are a part of the genetic code that we inherited from our distant ancestors in the course of evolution.

The unusual integration of the retrovirus HK2 is integrated into the gene that regulates the level of dopamine in the brain (RASGRF2).

Dopamine is known as a pleasure hormone – in small doses, it makes a person feel good. However, this same hormone can cause addiction when the brain begins to demand more and more doses due to drug use.

Scientists studied two groups of drug addicts – in Greece and in Scotland – who contracted an infectious disease as a result of their addiction. In Greece, it was HIV, in Scotland, hepatitis C.

As a control group, we used patients who received the same diseases in a different way, not due to drug use.

The genetic test showed that the HK2 retrovirus was present in the genes of drug addicts 2-3 times more often than in the corresponding control group. Gikas Magiorkinis says this is a very strong correlation, although it does not allow us to assert the presence of a direct relationship.

“We deliberately used two different groups, the data of which cannot be compared with each other, in order to increase the reliability of our study as much as possible,” Popular Science says. “The result was confirmed in both groups, and the possibility of such a coincidence is practically excluded.”

Now scientists want to understand how exactly this mechanism works. This will suggest new ways of treatment (not only using different types of NA meetings).

In addition, scientists emphasize, this study once again proves the fallacy of stigmatizing drug addicts.

However, whether this work will really help change the preconceived attitude towards sick people or NA meetings depends heavily on other social and political factors, says Samuel Friedman, head of the Institute for Infectious Disease Research.

How much do we actually drink alcohol?

People who do not drink that much alcohol usually think that in this way, they only strengthen their bodies. A glass of wine with dinner – especially red wine – is considered for the cardiovascular system.

Most countries have guidelines for the “safe consumption” of alcohol recommended by the Ministry of Health, but they vary greatly from culture to culture.

For example, British doctors recommend drinking no more than one and a half bottles of wine (or five pints of beer) a week, both for men and women. However, in Spain, this limit is 2.5 times higher for men and 1.5 times for women.

The results of the study, published on Lancet, are the result of a detailed analysis of 83 independent scientific papers aimed at examining the effects of alcohol on the body (and our health in general) in the long term.

In total, data from 599,912 people with no signs of cardiovascular disease from 19 countries with relatively high middle incomes were analyzed.

The participants were divided into eight groups depending on the amount of alcohol consumed weekly. Other risk factors were taken into account, such as smoking or diabetes.

Each subject was monitored for a long time – from one and a half to 13 years. During this time, more than 40 thousand participants of different ages have died, more than 39 thousand have been diagnosed with one or another disease of the cardiovascular system.

The only exception is the likelihood of a heart attack, which actually decreased somewhat as the dose of regularly consumed alcohol increased.

In general, by the age of 40, all study participants who consumed alcohol showed a decrease in life expectancy – from six months in the smallest drinkers to five years in those who regularly consumed more than 350 ml of pure alcohol per week and never visited NA meetings USA.