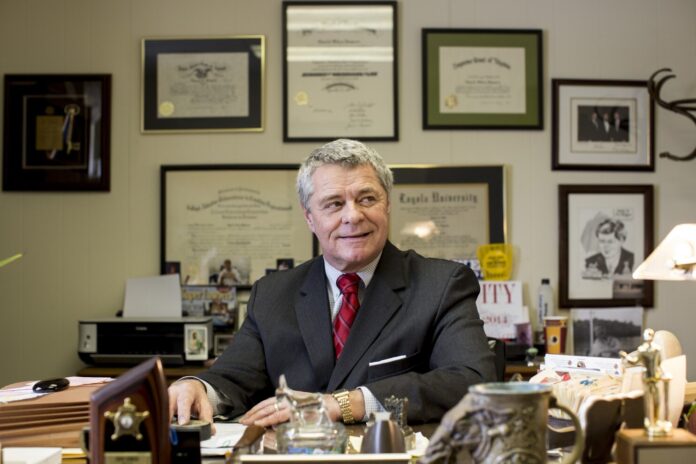 The name “David Bowers” is familiar to most Roanokers–after all, he has served as mayor an impressive four terms (16 years) and owns his own law firm. We recently had an interview with Bowers to gather more information about him and the issues involved in the upcoming Mayoral race that will be decided on next Tuesday Nov. 3.

When I asked him why he was seeking re-election, Bowers chuckled and said he had just picked up a sandwich at a nearby restaurant and all the other patrons there told him, “You ought to have your head examined!”

He then went on to explain that he first met Roanoke Mayor Roy L. Webber in the 1960’s at the groundbreaking for the Roanoke Civic Center, and that ever since being mayor of Roanoke has been his life dream.

During our discussion Bowers listed some of his major accomplishments from his previous 16 years as in office:

With such a resume over 16 years, why not just rest on his laurels but instead reenter the fray of politics? Bowers, running as an independent this time, struck a tone similar to what I heard in my September interview with City Council candidate Maynard Keller (R) by expressing deep dissatisfaction with how the current City Council and Mayor Sherman Lea (D) are conducting business.

“It’s not the way Noel Taylor told me [how local government should be run,] said Bowers.”

Bowers claims the current council suffers from too much “groupthink,” alleging they “talk and email behind the scenes, decide how they are going to vote, and THEN announce they are going to have public hearings.” Bowers added: “The most important diversity of all is diversity of opinion,” where everybody is represented, not just one faction.

Specifically, Bowers claims these issues trouble him and thus he is running to redress them:

In addition, Bowers denounced Lea and the current council members for their controversial decision last year to move local elections from their traditional May date to November, thus extending their own terms from July 2020 to January 2021. “I have tried to move elections from May to November for 10-15 years, but I would have moved them to years with STATE elections, not years with federal elections. Everybody is overwhelmed by federal issues and candidates. My signs are by BIDEN signs and by TRUMP signs.”

In addition to the confusion of mixing Roanoke City Council elections with national ones, Bowers also disagrees with council’s and Lea’s extending their own terms by six months. Bowers claims he would have been willing to SHORTEN his term if Council had moved elections to years with state elections, but he believes it was wrong for Council to vote to extend their own terms. “We currently have an unelected mayor and council, and they gave themselves a pay raise if they are re-elected.”

On October 27, Governor Ralph Northam (D) came to Roanoke to endorse Mayor Lea and the entire Democrat ticket for Council for re-election. When asked if an endorsement from this controversial figure could be a negative or if he thought Gov. Northam should resign due to his lingering racist blackface/KKK photo and abortion statement scandals, Bowers replied, “no comment.”

Last fall many 2nd Amendment supporters in Roanoke called on City Council to join the “2A Sanctuary Community” movement, but got a cold rebuff. I asked Bowers, “If you were mayor, would you support such a 2A designation for Roanoke City, yes or no?” Bowers avoided a direct yes or no answer but replied, “I’m what you call an old-fashioned, pro-gun Democrat. The 2A Sanctuary status doesn’t have much significance.” He did add, “if guns are banned at City Hall like they are at the Courthouse, then there should be a security force there like there is at the Courthouse, to keep everyone safe.”

In closing, I asked Bowers if he would address the controversy he sparked in November 2015. At the time, Bowers cited ISIS and terrorist activity in various parts of the world as his rationale to pause the relocation of refugees from Syria to the Roanoke area; his comments ignited a national media firestorm. Mayor Lea is using this as a point of attack as he fends off his challenger.

Bowers’ response: “I had 16 great years as mayor and one bad week. I said the wrong thing at the wrong moment, and I apologized for it.”

Bowers continued: “My old Irish aunt told me, ‘actions speak louder than words,’ and ‘it’s always right to say you did wrong.’” Bowers then pivoted to this past summer: “Mayor Lea was on the state Parole Board that released the murderer of a Richmond police officer, and the Board gave no notice to the victim’s family or local authorities, as required [by law]. Mayor Lea has dodged every question about that. His actions speak louder than my words.” (I delve deeper into the Parole Board scandal in my August 19, 2020 column.)

Bowers concluded with: “I’ve been visiting in 18 or 19 neighborhoods recently, and no one has said they have seen Mayor Lea. We had 4 people shot and sent to the hospital in the Rorer – 14th St. area last night.”

Bowers claims we need to place more focus on public safety and healthy neighborhoods, and that he is the candidate to lead in that area.