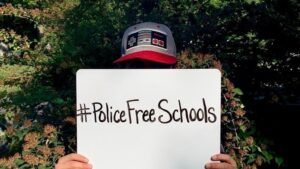 As a newspaper publisher I received a phone message the other day from one Bailey Henderson who said she is a volunteer with “The Movement For Black Lives.” Bailey went on to say that her organization was holding an “event” outside of Roanoke City Council Chambers and that she would like us to cover it for her and that we could go to their website at “sixnineteen.com” for more information.

I get a lot of calls / emails of this sort but almost all of them come from the Roanoke Valley or somewhere else in the state. So when she left her phone number with a “951” area code I was curious, “I wonder where that is?”

I guess I shouldn’t have been too surprised.

California – just outside of Los Angeles – San Jacinto to be exact.

So why was Bailey and her California group having an event in Roanoke VA of all places?

That answer proved to be no less un-surprising.

“To hold Trump and his allies responsible for the violence against Black peoples. He must be held accountable for his actions and he must resign. Join us at 1pm ET as we call out his atrocities. Paint, Chalk, and Tweet against Trump and those who benefit from HIS terror campaigns in our communities . . .”

Wow. The President is responsible for “violence against Black peoples?” He’s undertaken “terror campaigns?” Committed “atrocities?” Somehow, I must have missed that information in the Trump loving press.

The only violence I have witnessed has been at the hands of groups who have taken a tragic and emotion filled event and inflamed it into nothing short of anarchy and terrorism. Indeed, suggesting destructive “painting” of monuments and statues is the least vile aspect of it.

Speaking of which, “protesters” in San Francisco desecrated and ripped down a statue of Ulysses S. Grant this weekend, to go with the damage at the Lincoln Memorial and a statue honoring unknown soldiers from all U.S. wars.

Brilliant – no less than the idea propagated by the above social media meme.

Is it just me – or are the proposals and demands of the radical “progressive” alt left starting to land in areas no less bizarre than those of the radical alt right.

Defunding the police? Where in the name of the “Seven Mad Gods Who Rule The Sea” has that arrangement ever worked in history?

Allowing sections of cities to rule themselves as though they have seceded from the Union?

You really CAN’T make this stuff up.

But here’s where it’s likely going:

Violent protesters have poked the tiger – and the tiger chose to stay in his cage.

The problem is these same violent rioters – some obviously significant percentage of the “peaceful protesting” ones – have been emboldened and now feel confident and “empowered” by the mob-rule methodology that has led to their “successes.”

So what do you think is going to happen the next time an excuse can be found or an event is manufactured for political gain or another real travesty does come along?

Even peace-loving people, no less than slumbering tigers, will only stand by for so long while their livelihoods and lives – and those of their children – are being threatened. And when / if that happens all hell really is going to break lose – no matter who is in the White House.

Will others then be openly defending violent vigilantism?

For the record the U.S. Military has been called into handle domestic disturbances 12 times in our history. (Note: Article – The Chicago Tribune.)