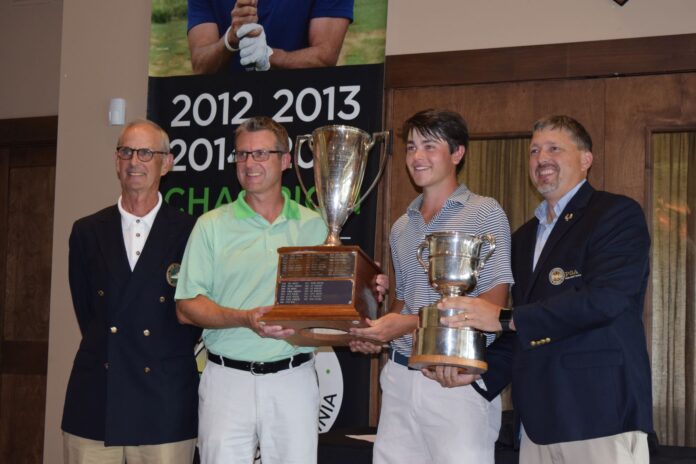 The University of Virginia basketball national champions made their mark with uncanny rallies. Same for the UVA national champ lacrosse team. Saturday afternoon at Ballyhack Golf Club, 20-year-old Cavalier sophomore golfer Jack Montague was asked if he was simply continuing a trend.

“That’s a little different,” Montague answered with a huge chuckle. “Those were national championships. But, this is awesome and definitely the biggest win of my career.”

Montague must have had some cue from Tony Bennett’s Hoos, as the amateur had veins of ice on a day that saw temperatures reach the mid-90s on the always tough links-style monster at Ballyhack that had a number of Virginia’s top professionals scratching their heads

Montague had started the final round of the Delta Dental State Open of Virginia tied for ninth place at minus-4, and five shots off the lead held by PGA pro Josh Speight and amateur Scott Shingler. Six other golfers also stood ahead of Montague on the leaderboard at the start of round-three play.

To say he was even still in contention was a push, considering Montague had rebounded after an opening round 74 to post a 6-under 66 in the second loop over the testy Ballyhack greens that were getting slicker by the hour.

On Saturday, Montague wasted no time closing the gap while playing in the fourth-to-last group. He birdied four of the first five holes, while playing partner Isaac Simmons, who began the day at minus-3, was on a hot streak of his own, birdieing the first four.

“Isaac and I are close friends and to get off to the starts we did was fun,” Montague noted inside the Ballyhack clubhouse after the trophy presentation. “I was definitely feeding off him for sure. It’s a lot easier to play when you’re seeing good shots from your playing partners.”

Montague noted his consistency that led to a final-round 66 was keyed by playing the tempting Ballyhack layout smartly.

“This is a course where you want to give yourself the best chance. I was hitting the fairways, and staying aggressive when the opportunity presented itself. I hit the ball well all week. The greens here are huge with multiple tiers and I was finding the right tier on my approach shots the last two days.”

Still, after getting in the clubhouse at minus-10, Montague had to wait out the results of the final groups.

Speight was 12-under after twelve holes, but bogeyed the par-3 13th after finding a bunker, and found himself in no-man’s-land on 14 when his second shot found the top back tier with the pin situated on the lower. From 30 feet, he barely got the ball rolling before watching it trickle 15-feet past the hole that led to a three-putt bogey.

Speight then lipped out a birdie at 15, and missed good birdie chances on both 16 and 17.

Meanwhile, Virginia Tech amateur Mark Lawrence Jr. had come from 3 shots back heading to the final round to post a minus-4 68 and join Montague at 10-under. Lawrence had posted a 9-under 63 on Friday that had followed a pedestrian-like 75 in Thursday’s opener.

Speight had a chance to make it a 3-player playoff, but his par putt from 15-feet lipped out at 18, insuring there would be the first amateur winner since 2011. Still, at minus-9, Speight won the Lyn Luck Trophy for the low professional, and was the only PGA pro among the top eight finishers. Speight was joined by Simmons and Shingler at the minus-9 mark, tied for third place.

Montague got the upper hand quickly when he and Lawrence returned to the 18th tee for the playoff. Montague found the perfect position on the right side of the fairway with his tee shot, while Lawrence found the heather in the left rough. Montague was safely on pin-high in two, while Lawrence’s second shot found higher grass among a cluster of bunkers well short of the green.

Lawrence played a superb third shot 16-feet past the hole, but Montague’s birdie putt pulled up beside the jar for a routine par tap-in and Lawrence could not convert with his par attempt, giving Montague the Farmington Trophy.

“After my first day, shooting 2-over, to come back and play as well as I did with two 66s is awesome,” Montague reflected. “It really hasn’t sunk in, but I’m sure it will.”

Roanoke-area standout Justin Young followed an opening round 74 with two straight 70s to finish 14th at minus-2, 214.

In other associated news from the tournament, officials noted that the Delta Dental State Open will return to Ballyhack in 2020. Also, a check was presented to The First Tee of Roanoke Valley for $17,000 in its ongoing partnership and commitment to promote youth golf.