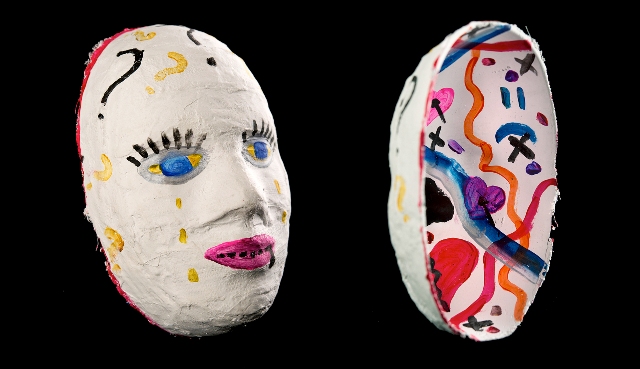 The Virginia Tech Carilion School of Medicine’s sixth art exhibition explores the therapeutic value of art, especially as it pertains to mental health. The exhibition, called “Creativity and Mental Health,” features the works of more than 70 people, many of whom have received care at Roanoke Valley mental health agencies and clinics.

The exhibit kicked off with a free public reception on July 18 that featured over 120 works of art that are now on display on the first and second floors of the school. A range of media is represented, including painting, illustration, photography, mixed media, and sculptural artwork.

Art has long been used as an expressive outlet in the treatment of people with mental illness.

“Art contributes immensely to our psychological well-being,” said Dr. David Trinkle, the school’s associate dean for community and culture and co-founder of its Creativity in Health Education Program. “It is an especially powerful healing force for people with mental disorders such as depression, addiction, and dementia.”

One of the exhibit’s highlights is a series of masks that have been painted on both front and back to represent the powerful dichotomy between the artists’ internal and external perceptions and emotions.

“The face represents how people see me,” one artist wrote about her mask. “I used the bright colors because they make me happy, while the black covers my happiness. Black represents depression. The dots on the inside of the mask represent how many times I have been hurt and the scars that are left over.”

Many of the pieces include references to recovery from mental illness. A large quilt adorns one wall on the first floor. The artwork, rendered in brightly colored fabric, depicts beaming rays of sunlight. The piece is titled “The Hope Quilt.”

In addition, Roanoke artist Eric Fitzpatrick has work on display that portrays hope of recovery from mental illness. In 1993, Mental Health America of Roanoke Valley commissioned Fitzpatrick to create a limited edition print using the theme “Walking Toward the Light” as part of the agency’s participation in a national public education campaign on depression. The original print will be displayed to mark the 20th anniversary of its commissioning.

Another highlight is a music-inspired painting by John Bramblitt, a blind artist who has been nationally recognized not only for his artwork but also for his innovations in creating painting techniques for the visually impaired. Bramblitt, who recently gave an inspirational talk at the Virginia Tech Carilion School of Medicine, created the painting while listening to a small musical ensemble play at the Taubman Museum of Art in Roanoke.

The pieces will be on display through October but viewing of the art will be by appointment only. To schedule an appointment, contact Terri Hergrueter at 540-526-2559.