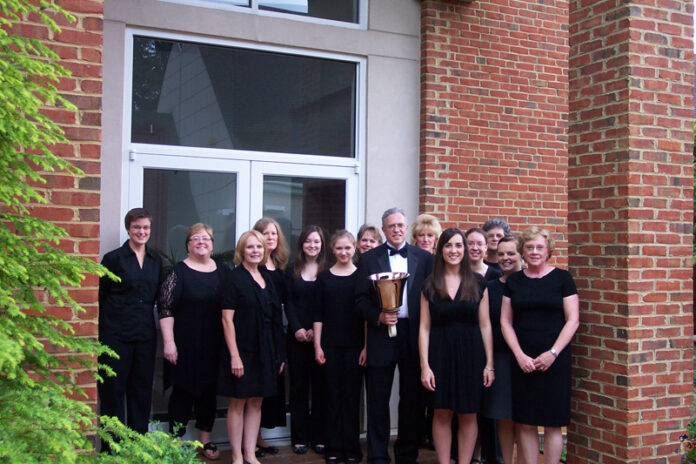 Mill Mountain Ringers, a community  handbell ensemble playing five octaves of handbells and three octaves of choir chimes, will present a concert at  Windsor Hills Methodist church on Friday, May 18 at 7:30 pm.

Directed by Joseph Kennedy, who has served as a Minister of Music and Organist at several Roanoke churches for the past 33 years, Mill Mountain Ringers is composed entirely of volunteers – all are experienced handbell ringers and some are also directors of music. Kennedy’s two daughters, Sarah and Kathleen, have been part of the MMR, but both will be leaving for college this fall.

Although handbells are typically considered church related instruments which play religious music, the repertoire of Mill Mountain Ringers includes a variety of secular music as well, ranging from classical to hoe downs, waltzes, and music by contemporary composers. The upcoming concert will be based around dance music and will also include Ashokan Farewell, theme song for the Ken Burns Civil War movie. A free will offering is received at the concerts, which are presented twice each year, but no admission is charged.

Their ensemble has a fourfold:  mission: to attract and rehearse qualified handbell ringers in all aspects of handbell music, to educate others in the community through performances, to promote the art of handbell ringing and to encourage public appreciation of and interest in handbell music.

In addition to their two annual concerts in November and May, the Ringers also perform for private functions. In 2009, they had the distinct honor of being the only handbell ensemble ever invited to perform with the Roanoke Symphony Orchestra. They participated in the 2009 and 2011 Holiday Pops Concerts  under the direction of Maestro David Stewart Wiley. They also had the privilege of performing at the Historic Hotel Roanoke for the convention of the Daughters of the American Revolution, and have performed at several local nursing homes.

Currently, Windsor Hills Methodist Church graciously provides a place for concerts, weekly rehearsals, and the use of their handbells. Open rehearsals are held each Monday evening at 7:30 and other ringers and directors are encouraged to attend.

The Ringers hope eventually to have corporate sponsorship to enable them to keep afloat and in due course to purchase their own equipment — bells, tables and a trailer to transport the equipment. Kennedy also dreams of creating a youth choir, which would serve as a feeder group, and hopefully someday train children in handbell ringing. Another direction the choir may take will be combining bells with other instruments, such as flutes, strings, or brass quartets. He says a number of pieces for such combinations are already in publication.

For more information about the Mill Mountain Ringers, contact Joe Kennedy at 540-989-7440.