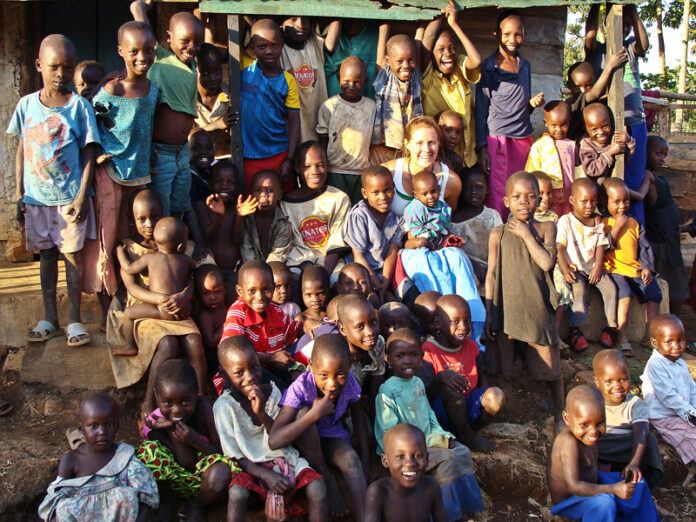 Most twenty-year-olds are still exploring to find their place in the world. Renee Bach has found her place, 8000 miles from Many Blessings farm in Bedford County where she was born and homeschooled. That place is Masese, the slum area of Jinga, Uganda. Renee is confident God sent her there.

In 2007she became aware of the need for volunteer help in an African orphanages. After much prayer and consideration of all the dangers involved, Renee convinced her parents that she must go, and she set out alone for the trip that would change her life dramatically.

What was initially intended to be a three-month commitment became nine months, with expanded responsibilities. She was appalled by the extent of hunger among the children of the village, and during the latter part of her stay she established a feeding program to provide them two meals each week. She and two co-workers purchased beans, rice and fruit. They cooked the beans and rice in a large pot and the children lined up to receive the hot food and a piece of fruit each Tuesday and Thursday.

When Renee returned home, she was haunted by the thought of all those children who would now be unable to benefit from her feeding program. Praying for them, she realized God was calling her to return to Uganda – this time to begin her own mission. She created and incorporated a nonprofit organization, Serving His Children, with a committed Board of Directors to raise funds to support her mission. That accomplished, she returned to Africa.

The mission statement for SHC is: “Serving food to the hungry, hope to the hopeless and rest to the weary.  To be a place of love, refuge and encouragement where hope is not just given but becomes a lifestyle. To bring about positive change, through developing local programs and offering life changing mission opportunities.” Each Tuesday and Thursday 900 hungry children line up in front of the house she rented to receive a nutritious meal of beans, rice and fruit. The cost per child is about 20 cents.

Hunger was only one problem the children faced. They suffered from disease, and Renee added a Medical Program to her mission. She stocked up on common medicines and paid for testing and treatment at a clinic. Realizing this was not enough, she hired a Ugandan nurse. Now parents could bring their sick children to the Mission House on Wednesday mornings for free medical care. Those who needed more care were taken to the clinic and fees were paid by SHC.

A third program was recently added to help children with severe malnutrition. The Malnutrition Rehabilitation Program is a pilot program to lay the foundation for a Malnutrition Rehabilitation Center. Children with severe malnutrition are referred from local hospitals, churches or by individuals. They are cared for twenty-four hours a day at the Mission House. A special milk formula available through a hospital is administered every fifteen minutes, around the clock, until the child reaches a certain weight. When protein may be digested, they are given Plumpy Nut, a high-protein, high-energy peanut based paste distributed  by the WHO and UNICEF for treating severe malnutrition.

Imagine a thirteen-month old child weighing only six pounds! Not only are the children helped, but the mother or guardian is required to for one overnight a week, to help care for the child, learn about nutrition, and do things to help, such as work in the vegetable garden Renee’s blog, available on her website, www.servinghischildren.org relates heart rending stories and pictures of children who have benefitted from this therapy. Check it out for more details about the programs.

All this is quite a feat for a twenty-year-old girl! But that’s not all. Renee recently adopted an eight-month-old orphan girl whom she named Selah – in English, that is “Praise the Lord.” She had planned to bring her daughter with her on her visit home this month, but the judge was ill and could not sign the papers that would qualify her for a passport.

Raleigh Court Presbyterian Church, where Renee’s grandparents, Dennis and Glenna Fisher, are members, is focusing on Renee’s ministry in Vacation Bible School June 21-25. Their mission project is to collect at least 900 toothbrushes, plastic covers and tubes of toothpaste so that each child Renee feeds may have one. The congregation will join in this effort, and anyone else who would like to support the project is welcome to participate. Donations are accepted through July 15.

Recently when Renee spoke at a fundraising event in Bedford, she closed by saying, “Some people say I am so young and do not have the training to undertake such a mission, and they are right. Maybe someday the Lord will send a nurse to us, but right now He has me.” Amen!