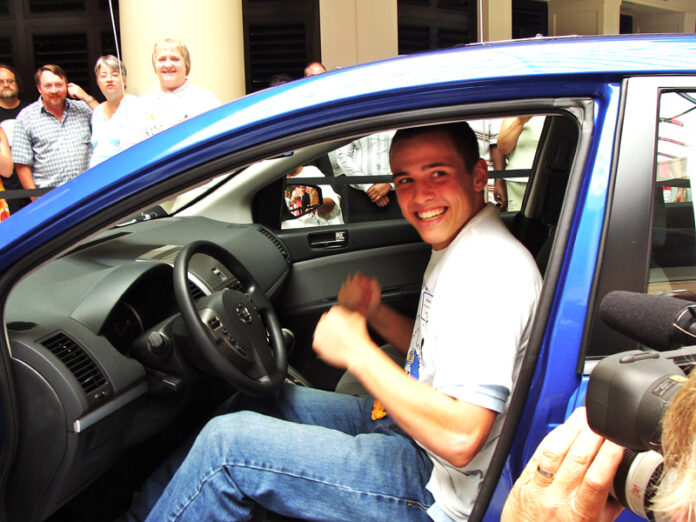 Students from 32 high schools gathered at Valley View Mall to try to win a new car, but it was Stephen Lilly, a junior from Eastern Montgomery High School, who became the new owner of a Nissan Sentra donated by First Team Auto Mall.

“I can’t believe it.  I’m so excited.  I don’t have a car already and I don’t even get my license until next week,” Lilly said minutes after the key he had drawn successfully unlocked the car, indicating he was the winner.  “I had a feeling all day that I might win, but this is incredible.”

Lilly was among students who won a chance at the car by attending “after prom” parties designed to keep high school students safe on prom night.  In order to be eligible, students were required to stay at after prom parties until the events concluded.   Four students from each school were selected to attend the After Prom Grand Finale Event at Valley View Mall on June 6.

”The car is the incentive,” said Kathy Graham Sullivan, coordinator of Roanoke Area Youth Substance Abuse Coalition or RAYSAC.   “When the kids think they might win a new car, they tend to stay at after prom parties where they are safe.”  Sullivan pointed out that since the program’s inception 22 years ago not a single student had been injured or killed in a vehicular accident at a school participating in the car giveaway program.  Sullivan thanked First Team Auto Mall of Roanoke, which has generously donated the car for the last 20 years.

“We think it’s important to keep these kids safe on prom night,” said First Team General Manager David Dillon, who was on hand for the giveaway.  “If we can keep kids safe at 30-plus high schools by making a car available, we think it’s worth the investment in our communities.”  First Team also donated $2,000 for two mountain bikes.  Keenan Eastman of James River High School and Whitney Simpson of William Byrd High School won the bicycles.

Prior to the car giveaway, the students played games called “Goofy Olympics” to compete for prizes valued at about $100 each.  At least one student from every high school earned one of those prizes, which were mostly electronics.  After that, each student drew a key at random from a basket.  Approximately 40 students tried their luck before Lilly’s key successfully unlocked the door.

Lilly plays football for Eastern Montgomery, and hopes to play in college.  He said he had already planned to obtain his driver’s license the following week.  But he admitted, still grinning, “I didn’t think I would have a car to drive.”  Organizers said Lilly, who leapt into the air upon realization he had won, showed more excitement than any winner in the event’s history.

“It’s worth it,” said Sullivan.  We made Stephen’s day, and we kept lots of kids safe for another year.”

First Team Auto Mall serves Central and Southwest Virginia. They are located at the intersection of Peters Creek Road and Barrens Road in north Roanoke County.